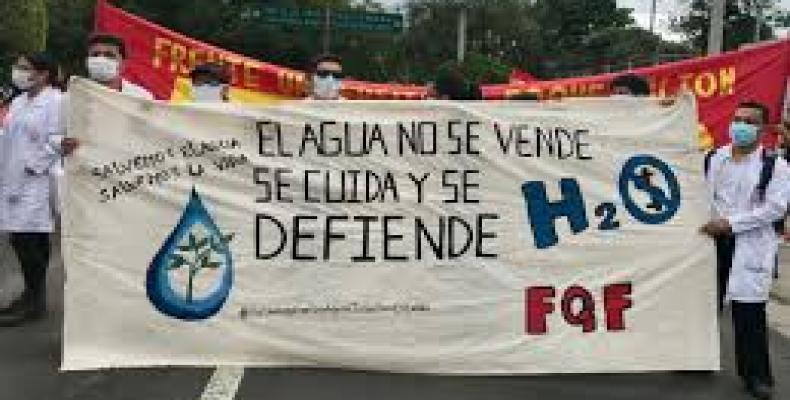 San Salvador, March 28 (RHC)-- El Salvador's National Alliance against the Privatization of Water condemned last week the water privatization by the sugar industry and the possible implementation of a water regulation bill that could lead to more privatization, an issue activists have been grappling with for years.

Across El Salvador organizations, networks, churches, water boards and communities making up the National Alliance against the Privatization of Water said they still have nothing to celebrate as they continue to fight against actions by the ARENA, PCN, GANA and PDC parties to approve a Water Law that privatized water management.

In a press release, the National Alliance Against Water Privatization called the sugar industry, “an irresponsible, highly polluting sector that strips us of our water and our protected areas” adding that the industry manipulates “laws, institutions and political parties to privatize water.”

“It is clear that the objective of the sugar industry to finance the ARENA, PCN and PDC parties is to defend their corporate interest, passing a law that gives them control of water or preventing approval of one that benefits the population and thus continue with the dispossession of water in the territories cultivated by sugarcane,” they added.

El Salvador has had issues with water scarcity for years, and the problem is only getting worse.  The United Nations has recognized that access to fresh water is a fundamental human right.  According to the UN, recognizing the social aspect of water distribution is fundamental to establishing a path towards equality and to push for social and environmental justice.