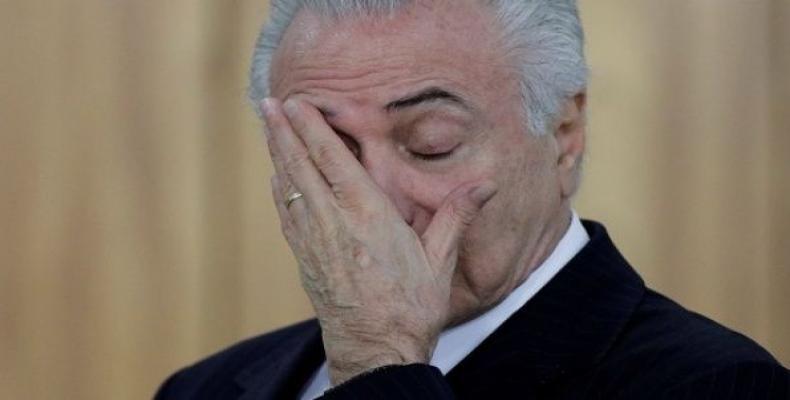 Brasilia, March 30 (RHC)-- A Brazilian judge has taken on a new case of corruption against the country's former President Michel Temer.  The decision of Judge Rodrigo Bentemuller is based on a supposed bribe of about $128,000 received by one of Temer's assistants, whom the police arrested in 2017 with a suitcase containing the money which was supposedly intended for the former president.
-
Temer, who stepped down from power as Jair Bolsonaro assumed office January 1st, spent four days in prison on the order of a judge last week for another of 10 cases he faces in court.  The most recently accepted complaint concerns the money found in a suitcase carried by Rodrigo Roucha Loures, a close associate of Temer, which was in fact intended for the former unelected president and had been agreed on with the then-owners of the meat company J & F, brothers Joesley and Wesley Batista.

Loures was filmed by the police when she ran out of a restaurant in Sao Paulo, with the suitcase full of money, which had been delivered to her by a J & F executive.  A month and a half before the arrest of Loures, the local press had released audio in which Temer could be heard talking with Joesley Batista about measures that the government could adopt to benefit the meat company.

At the time, the Prosecutor's Office requested the dismissal of Temer who presidential immunity, in order for him to be investigated, but such a request was denied by Congress.

Temer, who is 78 years old, is the second president in Brazil's history to go to prison for a case linked to the Lava Jato operation, which saw the investigation of charging of dozens of politicians and businessmen since 2014.  The first was Lula da Silva, who is serving a sentence of 12 years and one month over alleged corruption and money laundering, charges that experts say lack sufficient evidence.