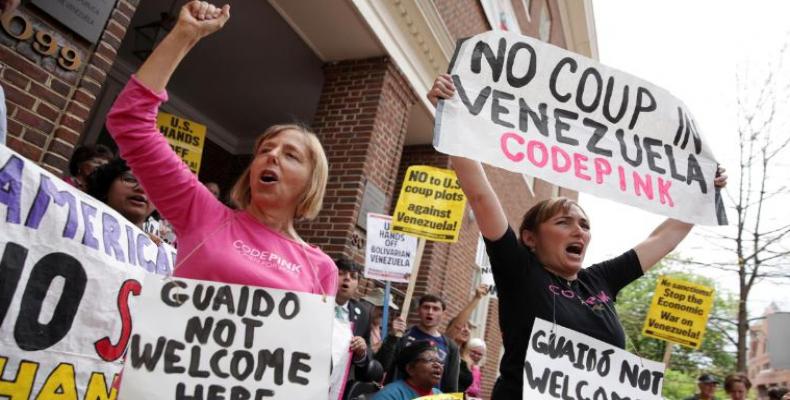 Washington, May 11 (RHC)-- Right-wing supporters of so-called 'president' Juan Guiadó attacked the Venezuelan Embassy in Washington, DC on Friday.  According to reports, at dawn on Friday, May 10th, supporters of the opposition politician, who appointed himself president, entered the Venezuelan embassy in Washington D.C. by force and intimidated volunteers of the Embassy Protection Collective.  The peace activists are part of a U.S.-based solidarity movement that is defending the diplomatic mission in the U.S. capital.

Code Pink co-founder Medea Benjamin gave teleSUR an exclusive update on what happened at the Venezuelan Embassy.  She said: “In the middle of the night, two people broke the windows in the basement and broke inside.  One of them left voluntarily but we have to get the Secret Service to escort the other one out,” Benjamin said and added that none of the intruders were arrested by U.S. authorities, although their actions were clearly illegal.

She also mentioned that Code Pink activists have not able to get any food or medicine inside the embassy because the “pro-Guaidó people are blocking us every time we try to do it and physically attacking us.”  After each violent attack, however, “they don’t get arrested either.”

Regarding the lack of electricity inside the Venezuelan embassy, Benjamin maintained that the U.S. State Department told the local power company that the building's owner is Carlos Veccio, “who is the fake ambassador of the fake government of Juan Guaido ... and told them to turn off the electricity.”