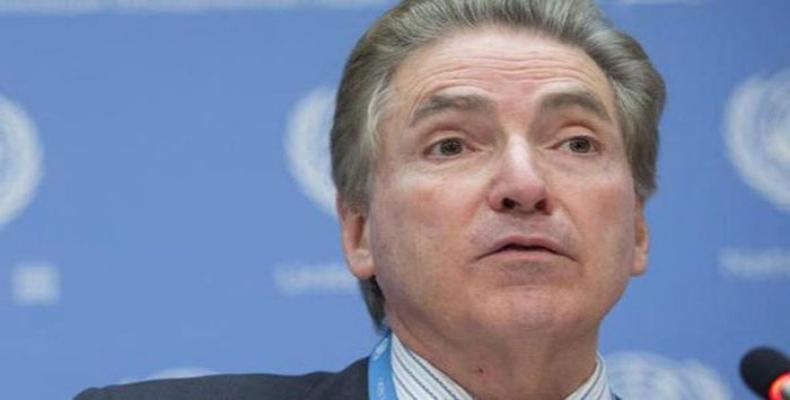 United Nations, July 6 (RHC)-- International human rights law expert and former consultant to the United Nations Office of the High Commissioner for Human Rights (OHCHR), Alfred de Zayas, says Michelle Bachelet's report on Venezuela released earlier this week is, "unfortunately, unbalanced and does not draw conclusions that can help the Venezuelan people."  He said the real and most urgent remedy for Venezuela is for the United States to immediately lift sanctions on the nation.

Zayas, a leading expert on human rights and international law and a signatory of several guiding United Nations declarations on human rights and peace, tweeted Friday that the report by current High Commissioner for Human Rights, Bachelet, “should have clearly condemned the violence by extreme right opposition leaders and the calls for foreign intervention #Venezuela.”

Instead, Zayas emphasizes, the report “is fundamentally flawed and disappointing,” and the visit proved to be a “missed opportunity” to open up UN channels with the Venezuelan government that “has requested and needs advisory services and technical assistance, but in good faith,” wrote the expert on his personal webpage Friday.

Zayas went to say on his site that the “report should also have focussed on the criminality of the repeated attempts at a coup d’etat (in Venezuela because) there is nothing more undemocratic than a coup.”

During Bachelet's official visit to Venezuela in June, the commissioner heard the personal testimonies of victims of opposition violence and received 123 documented cases of citizens who were lynched, beheaded and killed by them in protests of 2013, 2014 and 2017.  The commissioner, who is the ex-president of Chile, had promised to incorporate them in her report, but they didn’t make the final cut.

Zayas remarked that "the fundamental principle that guides any honest researcher is to audit all the parties, all sides must be heard. … It is unprofessional for the UN staff to ignore or not give appropriate weight to the submissions by Fundalatin, Grupo Sures, the Red Nacional de Derechos Humanos, and the specific answers provided by the government," but these voices were left out of the final product.

Zayas, a Harvard Law School graduate, said the report "pays little attention to the central problem: the financial blockade and the sanctions that cause so much suffering and death."

“If responsibility to protect means anything, it means that the international community must protect the Venezuelan people from United States sanctions, and make its rejection of unilateral coercive measures felt #Venezuela,” tweeted the expert Friday.

“United Nations support to the people of Venezuela is urgently needed.  The international community must find a way to force the United States to lift the criminal sanctions #Venezuela,” concluded the expert.

An April report by the Center for Economic and Policy Research (CEPR), co-authored by Jeffrey Sachs, concludes that U.S. sanctions on Venezuela have led directly to the deaths of over 40,000 residents unable to receive imported medicines, equipment, or foods.

“The sanctions are depriving Venezuelans of lifesaving medicines, medical equipment, food and other essential imports,” said Mark Weisbrot, the CEPR Co-Director and co-author of the report. “This is illegal under international laws and treaties that the U.S. has signed. Congress should move to stop it.”