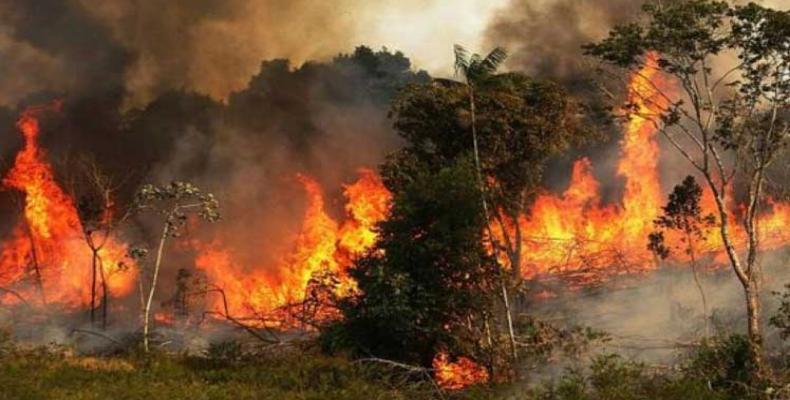 Buenos Aires, August 24 (RHC)-- Thousands of climate change activists have held protest rallies in front of Brazil’s consulates around the globe to express their strong dissent against Brazilian President Jair Bolsonaro over his alleged inaction on extinguishing raging fires that are devouring the Amazon rainforest, demanding him to protect the world’s largest tropical rainforest.

On Friday, crowds of climate activists gathered in front of Brazil’s consulates in the United States, Argentina, France, Britain, India, Colombia, Spain, Uruguay and several other countries to urge Bolsonaro to take effective measures in saving the Amazon rainforest.

The rainforest covers much of northwestern Brazil and extending into Colombia, Peru and other South American countries.  According to official figures, nearly 73,000 forest fires were recorded in Brazil in the first eight months of the year -- the highest number for any year since 2013. Most of these fires were sparked in the Amazon.

Earlier in the day, Bolsonaro said the army may be enlisted to help put out fires sweeping through the Amazon rainforest, as increasing international condemnation and calls for tough action to quell the unfolding crisis continued to increase.

The leaders of Britain and France have added their voices to an international chorus of concern.  A spokeswoman for British Prime Minister Boris Johnson said he was “deeply concerned” about the fires and “the impact of the tragic loss of these precious habitats,” and that he would use the summit of G-7 leaders this weekend to call for a renewed focus on protecting nature.

On Thursday, both French President Emmanuel Macron and UN Secretary General António Guterres said they were deeply concerned about the Amazon’s raging wildfires, with Macron calling the wildfires “an international crisis.”

However, Bolsonaro, who has already accused non-government organizations of starting the fires, responded angrily and to what he perceived as interfering in his country’s domestic affairs.  He strongly called on foreign powers not to interfere.

On Friday, the French leader lambasted his Brazilian counterpart when Macron’s office said Bolsonaro was lying when he played down concerns about climate change at the G-20 summit in Japan in June.   “Brazil has gone from being a global model of forest conservation to an international pariah,” Robert Muggah, research director at the Igarape Institute, a think tank in Rio de Janeiro, told AFP, adding: “The president has only himself to blame.”

“The extent of the fires in the Amazon area is shocking and threatening and not only for Brazil and the other affected countries, but also for the whole world,” said German Chancellor Angela Merkel's spokesman on Friday.

Peru has already announced it was “on alert” for wildfires spreading from neighboring Brazil and Bolivia.  Paraguay and Bolivia, for their parts, are battling separate wildfires that have devoured large areas of their rainforests.