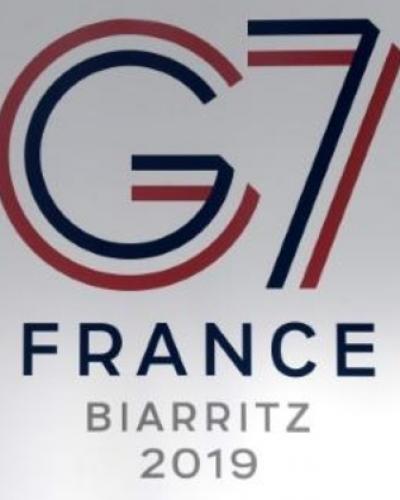 Paris, August 26 (RHC)-- The G-7 summit ends Monday in Biarritz, France, as member countries have agreed to an immediate $20 million fund to help fight raging wildfires in the Amazon.  They also said they were launching a global initiative to protect the Amazon rainforest.  President Trump was absent as G-7 leaders met for a climate change session today, but French President Emmanuel Macron said the U.S. supported the measure.

Trade was also high on the agenda at the G-7 as the U.S. sent confused signals about its ongoing tariff war with China.  Today Trump told reporters that “China called and they want to make a deal”; however, questions are being raised about the supposed call, and Trump officials have refused to give further details.

This comes after Trump appeared to express doubts about his decision to raise tariffs against China, telling reporters Sunday, “I have second thoughts about everything.”  Hours after he made the comments, the White House claimed Trump’s statements were “misinterpreted” and that he actually meant he wanted to ramp up tariffs even further.

On Friday, Trump unleashed a series of tweets saying he would raise existing tariffs on $250 billion worth of Chinese goods to 30%, and he would tax an additional $300 billion worth of Chinese imports at 15% rather than the planned 10%.  This followed China’s announcement it would retaliate against upcoming U.S. tariffs by raising taxes on American products. Trump also demanded Friday U.S. companies stop doing business with China and said he would pull US companies from China.

At the summit, Trump also expressed his desire to bring Russia back into the Group of 7 — formerly the Group of 8 — after it was kicked out for annexing Crimea in 2014. European officials, including European Council President Donald Tusk, rejected the idea, saying that next year “it would be better to invite Ukraine.” Trump also said his Miami resort would be a great location for the next G-7 summit.