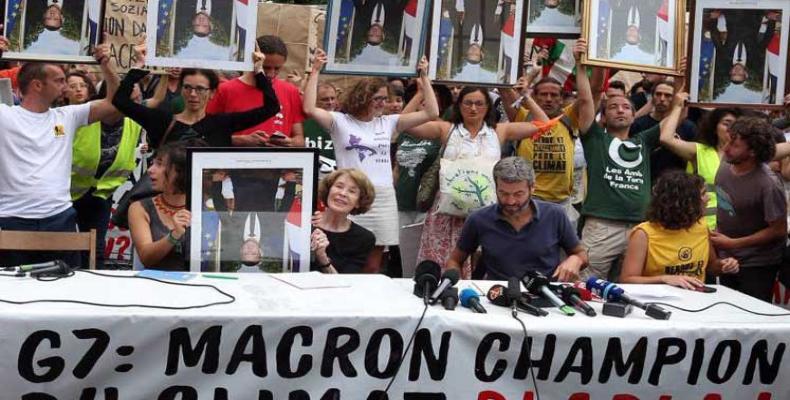 Paris, August 25 (RHC)-- Hundreds of anti-G7 protesters have held a rally in southwestern France with inverted portraits of French President Emmanuel Macron to express dissent against his policies and those of the group’s member states, as the French leader hosts six world leaders for the 45th G-7 Summit.

The protesters, who had taken down dozens of Macron’s official portraits from government buildings across the European country during the past couple of months, held the portraits upside down in their rally in Bayonne, southwestern France, on Sunday, the second day of the annual G-7 summit.

Despite their different demands, all protesters marched with a pledge to “take down Macron.”  The demonstrators chanted: “One, two, three degrees, it’s a crime against humanity!” as they rallied through the narrow streets of Bayonne near Biarritz, a seaside town on southwestern France’s Basque coast, where world leaders are gathering for the G-7 summit.

Later in the day, however, the rally in Bayonne turned violent when riot police fired tear gas and water cannon to disperse the protesters.  According to officials, dozens of people were arrested, 38 of whom were taken into custody by Saturday evening.

Some 24,000 anti-G7 protesters had marched near the border with Spain on Saturday.  Since Monday, activists opposing capitalism and globalization and environmentalists have rallied to express their opposition to the policies of the G-7 member states in nearby Hendaye, close to the Spanish border.

Paris has deployed over 13,000 police and gendarmes to provide the security of the event amid fears of disturbances by radical anti-capitalist groups, anarchists, or the so-called “Yellow Vest” demonstrators.