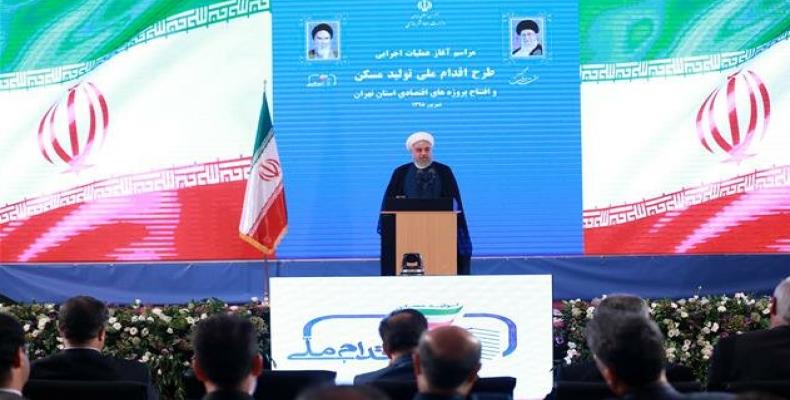 Tehran, August 27 (RHC)-- Iran will not talk to the United States until all sanctions imposed on Tehran are lifted, President Hassan Rouhani has said, one day after U.S. President Donald Trump said he would meet his Iranian counterpart to try to end a nuclear standoff.

Trump said on Monday he would meet Iran's president under the right circumstances to end a confrontation over Tehran's 2015 nuclear deal and that talks were under way to see how countries could open credit lines to Iran.

The Iranian president said that the United States must lift all its “cruel” and “unlawful” sanctions against Iran and begin respecting the nation’s rights as a “first step” towards dialog, emphasizing that the Islamic Republic will not engage in any negotiations for the mere sake of photo opportunities.

“We seek to resolve issues and problems in a rational way but we are not after photos.  For anyone wanting to take a picture with Hassan Rouhani, this is not possible” unless that party chooses to set aside all the oppressive sanctions and respect the Iranian nation’s rights, the Iranian president said in a speech aired live on state television.

Iran, he added, sits at the negotiating table with others only in order to secure its people’s rights and interest.  Tehran will make a change in its approach towards “those waging economic terrorism” against the county only if they “repent” of their past mistakes and turn back from the wrong path they have taken.

“We will witness no positive development” unless the Americans lift the bans and undo their hostile economic policies against Iran, said Rouhani.

He further touched on the 2015 nuclear deal — officially named the Joint Comprehensive Plan of Action (JCPOA) — whose fate remains in doubt in the aftermath of the US’s exit and Europe’s failure to fulfill their legal obligation to stand up to the American sanctions.

Rouhani noted that if the remaining parties honor their commitments under the JCPOA, Tehran would also live up to its end of the bargain.  He also emphasized that Iran’s military doctrine is “based on conventional arms,” adding that it has never sought weapons of mass destruction, including nuclear, chemical and microbial ones.

Tehran, he added, is not seeking tensions with the world, but rather “constructive interaction” as well as regional and global security.