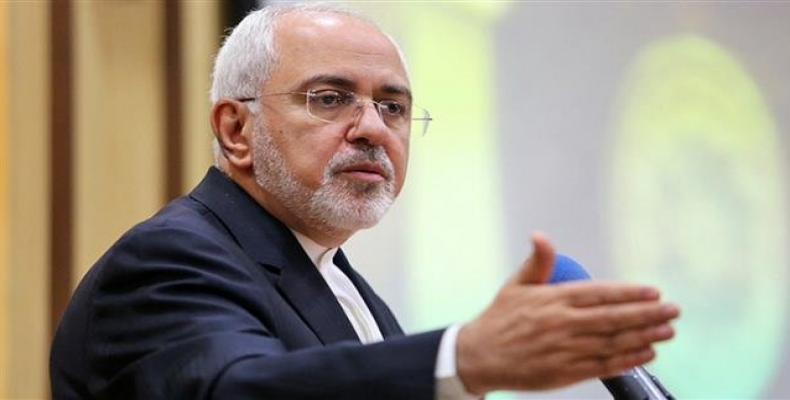 Doha, December 17 (RHC)-- Iranian Foreign Minister Mohammad Javad Zarif says economic sanctions imposed by the United States against Iran will fail to have any impact on the policies of the Islamic Republic at home or abroad.

"It's obviously the case that we are facing economic pressure because of the U.S. sanctions.  [The] United States is a major global power and it can actually create painful conditions for other countries.  But would that lead to a change of policy?  I can assure you that it won't," Zarif said in an address to the Doha Forum 2018 in Qatar over the weekend.

"If there is an art, we have perfected in Iran and can teach to others for a price, it is the art of evading sanctions," he added.  Although the U.S. has put so much pressure on Iran over the past 40 years, the Islamic Republic has managed to survive, he said.

U.S. President Donald Trump withdrew his country in May from the multilateral Iran nuclear agreement, officially known as the Joint Comprehensive Plan of Action (JCPOA), and decided to re-impose unilateral sanctions against Tehran.

Under the deal, reached between Iran and six major powers - the U.S., Britain, France, Germany, Russia and China, Tehran agreed to put limits on its nuclear program in exchange for the removal of nuclear-related sanctions.

In November, the Trump administration announced the re-imposition of the “toughest” sanctions ever against Iran's banking and energy sectors with the aim of cutting off the country's oil sales and crucial exports.

The U.S. administration hoped to get the other parties to the deal with Iran to likewise scrap the deal, but instead, they stressed that not only would they stick to the agreement, but they would also work to sustain it in the face of increased U.S. pressure. Europeans believe that the nuclear deal is an important element of international security.

Zarif further said there was room for talks with the U.S. but that Washington must "respect the outcome of the talks" they already had, in reference to the nuclear negotiations leading to the conclusion of the JCPOA.

"I can tell you as somebody who did all the talking for that document (the JCPOA) that neither Iran nor the United States can get a better document. So there is room for talk. But you need first to respect the outcome of the talks you already had," he added.
The Iranian foreign minister said: "There is no reason to engage in talks while the results of long and very difficult talks are still up in the air and the United States is actively trying to undermine those results."

Elsewhere in his speech, Zarif said Saudi Arabia intended to increase tension in the Middle East, referring to the ongoing crisis in Yemen and the gruesome murder of Saudi dissident journalist Jamal Khashoggi, which is widely believed to have been ordered by Saudi Crown Prince Mohammed bin Salman.

"Unfortunately, Saudi Arabia does not want to reduce tension. Actually, Saudi Arabia believes that it is in its interest to increase tension," the Iranian foreign minister added.

He held the U.S. and its ally Saudi Arabia accountable for the "humanitarian nightmare" in war-ravaged Yemen.  He emphasized that if the U.S. and its Western allies, who have supported Saudi Arabia under all conditions, wanted to have more stability in the Middle East, they "need to show that bad behavior would get a bad response."

Khashoggi, a one-time royal insider who had been critical of the crown prince recently, was killed after entering the Saudi consulate in Istanbul in early October.  Following weeks of denial of any involvement in Khashoggi's disappearance, the Saudi regime eventually acknowledged the “premeditated” murder, but has sought to distance the heir to the Saudi throne from the assassination.

A Saudi prosecutor said Khashoggi’s body had been dismembered, removed from the diplomatic mission and handed to an unidentified “local cooperator.”

The CIA is said to have concluded that the crown prince was behind the killing, but Trump is yet to endorse the assessment.