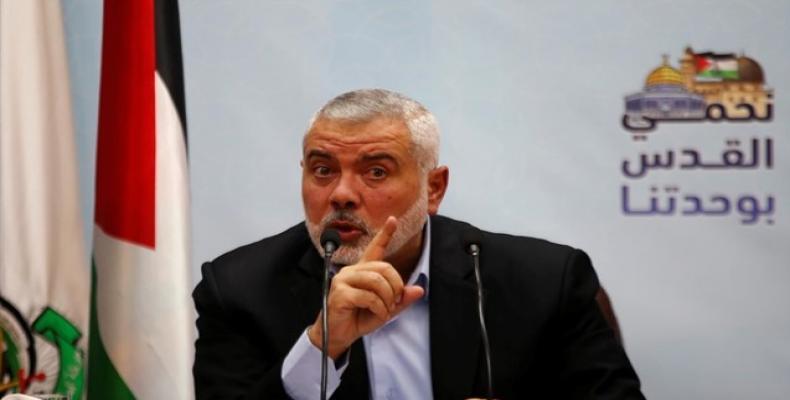 Gaza City, September 3 (RHC)-- A senior leader of the resistance movement Hamas has warned that the Israeli regime plots to create rift and division among Palestinian people and groups in the wake of recent blasts in the besieged Gaza Strip.

Ismail Haniyeh, the head of Hamas Political Bureau, made the remarks as he was commenting on bomb attacks that killed three police officers in the coastal enclave last week.  Haniyeh accused Israel of being behind the blasts in the besieged territory and said there was no room for extremism in Palestine.

He further noted that the Tel Aviv regime was seeking rift among Palestinians and Palestinian resistance groups to distract them from their main priorities.  The senior Palestinian official said Israel was after gaining benefits from insecurity in Gaza in order to thrive in the upcoming elections.

Palestinians have held weekly rallies along the Gaza border to protest the siege on the enclave and demand the right for refugees to return to their homes they were forced to leave during the 1948 creation of Israel.

The Gaza clashes reached their peak on May 14, 2018, on the eve of the 70th anniversary of Nakba Day (Day of Catastrophe), which coincided with a US decision to relocate its embassy from Tel Aviv to occupied East Jerusalem al-Quds.

On June 13, 2018, the United Nations General Assembly adopted a resolution, sponsored by Turkey and Algeria, which condemned Israel for Palestinian civilian deaths in Gaza.

It also called for “immediate steps towards ending the closure and the restrictions imposed by Israel on movement and access into and out of the Gaza Strip.