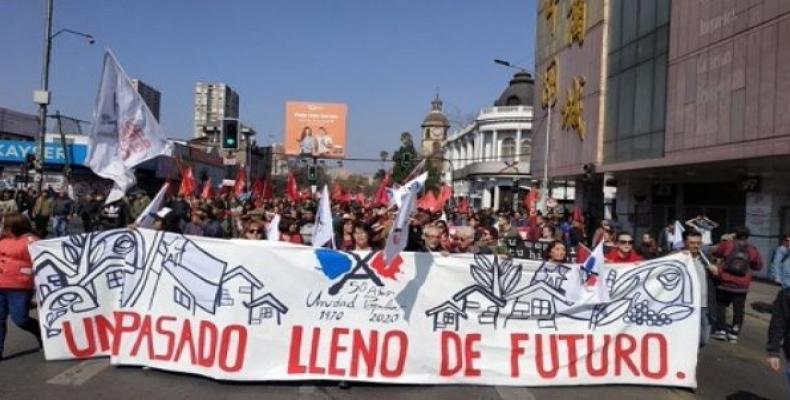 Demonstrators gathered on Sunday morning to march to the capital’s General Cemetery, as part of a peace march called by the Chilean coordination of human rights organizations to mark the 46th anniversary of the fascist miilitary coup d'état, and to hold a memorial to the disappeared and victims of Pinochet’s regime.

"We have spent our lives seeking justice; please tell us where are the disappeared political prisoners," said demonstrators, stressing that one of their principal aims of the annual march is to prevent the repetition of human rights violations in the South American country.

Waving banners with photographs of the disappeared, thousands of demonstrators shouted slogans asking "Where are they?" "We won’t forget, we demand Justice," and "Yesterday's impunity is at the root of today's injustices.”

The mobilization, accompanied by a police contingent, went on peacefully until the security forces began to repress the protesters using tear gas and arresting people.

The mayor of Recoleta (located north of Santiago de Chile) and a member of the Chilean Communist party, Daniel Jadue, who participated in the march, said that “the fight for truth and justice will continue in this country where we are so much used to forgetting and impunity.”

For his part, the vice-president of the College of Teachers, Jaime Gajardo, said the commemoration is more relevant today under the administration of the right-wing neoliberal government of Sebastian Piñera.  "We face a time in the country where there is a strong onslaught of employers and groups of power on workers, so this commemoration is more important than ever," the union leader said.

The Chilean president was sharply criticized recently by the opposition for not publicly condemning the statements of his Brazilian counterpart, Jair Bolsonaro, who praised Pinochet's dictatorship and taunted former President Michelle Bachelet on her family history.