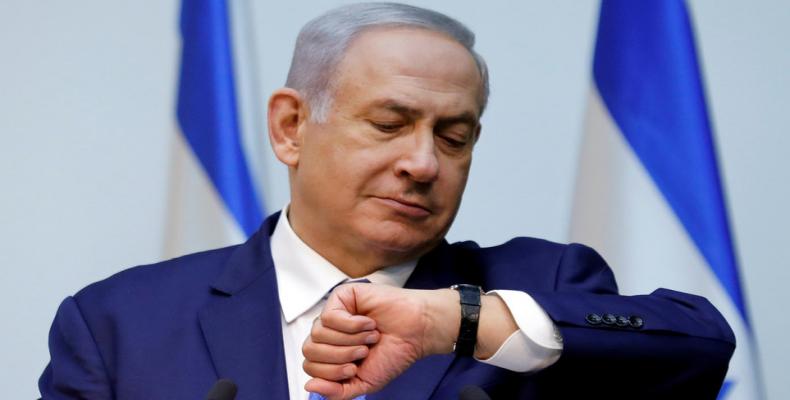 Tel Aviv, September 14 (RHC)-- Israeli Prime Minister Benjamin Netanyahu says he may start another military operation in the besieged Gaza Strip before Tuesday, September 17, when snap elections are to be held in the occupied territories.

Another conflict with Gaza "could happen at any moment, including four days before the elections," Netanyahu said on Friday morning after returning from a brief trip to Russia.  “The date of the elections does not factor [into a decision to go to war],” he added.

Earlier on Thursday, Netanyahu had made the same threat before boarding a plane to Sochi, Russia, when he said in a radio interview: "It looks like there will be no other choice but to embark on a wide-scale campaign in Gaza."  The threats came a couple of days after Netanyahu was ridiculed for being rushed off-stage during a rocket attack from the enclave.

During a campaign event in the port city of Ashdod on Tuesday, Netanyahu was forced to flee and seek shelter as rockets fired from Gaza threatened the area.  The sirens went off just as Netanyahu began his speech and addressed hundreds of supporters of the right-wing Likud-National Liberal Movement, which he chairs.

In an extraordinary scene captured on video from the event, the Israeli prime minister can be seen being whisked away from the stage by a gaggle of security guards.

The scenes of Netanyahu being forced to take shelter a few days before the snap elections provided a counterpoint to the image he had tried to cultivate as “Mr. Security,” Israeli media reported.  Emboldened by the scenes, his rivals are reportedly attacking Netanyahu for his cabinet’s failure to counter the Palestinian resistance group Hamas.

Since the Tuesday humiliation, the Israeli military has launched a number of airstrikes and artillery attacks against the Gaza Strip.