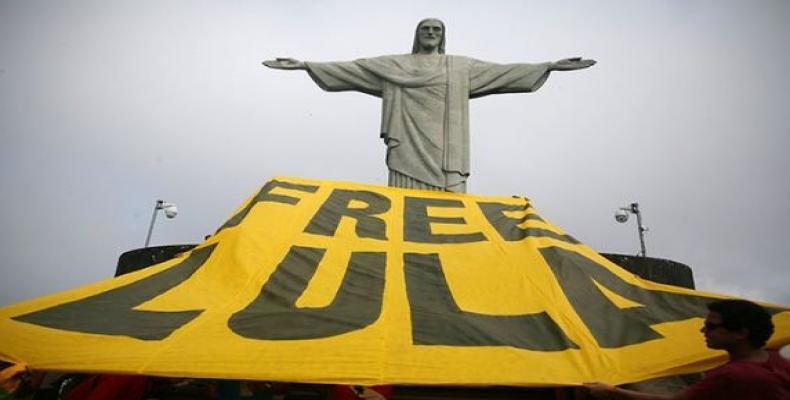 “I’m turning 73 years old but I’ve got the energy of a 20-year-old boy”, said the former Brazilian president during his first interview to an Argentinian daily since he was imprisoned April 7, 2018.  Sitting behind a small desk and guarded by a police officer, he confessed he has planned to live 120 years, therefore, he needs a lot of strength because otherwise “life would be boring.”

The interview took place in Curitiba’s prison, in Parana where he is held in solitary confinement 22 of the 24 hours of a day.  “The day I stop believing in justice, I wonder what I am going to do.  Not because a judge has been a scoundrel, you can’t judge the whole system because of that mistake. The problem is that I hope, with peace, that Supreme Court takes a decision. I’ve got the Habeas Corpus which is due to be submitted to vote” soon, Lula said answering questions about the progress of his case.

His defense team hopes with optimism that in the coming months Lula could be released or at least he be granted house arrest.

During the interview Lula, talked about several aspects of current Latin American reality.  He thanked Argentinian presidential candidate Alberto Fernandez for paying him a visit and advised him to rule for “the poor” and never lie to them.

“I could have left Brazil but I’m still here because I have for witnesses of my truth: myself, God, the judge and the prosecutors.  I proved my innocence.  In fact, I already did.  What I want is them to prove the opposite.  I want and continue to wait for them to show I’m guilty," the former president told reporters from Pagina12.

"I’m waiting to see the record of an embezzled dollar by me.  The only crime I’ve ever committed was showing Brazilian elite that is possible that the common people eat beef; travel to Bariloche, Buenos Aires or Miami; it’s possible for them to have a home, go to the University, have access to culture, entertainment, theaters, cinemas or restaurants.”

During his administration, Lula created over 22 million of jobs, raised minimum salary to 75% and put 52 million hectares in disposition for an agrarian reform.  When asked about the mistakes of Workers Party administrations, Lula went on to point that the PT, compared to traditional right-wing parties, had little time in power and yet managed to achieve much more than the traditional parties of Brazil.

He went on to question why the big Brazilian media organizations did not cover the Intercept reports on his case.  "Well, for traditional Brazilian press there is no Intercept (…) The media does not want to get rid of Lava Jato because when Lula gets his freedom back, a big part of it will lose its credibility.”

Finally, with the eyes set on the future, Lula said his role now is to contribute to forming young people with more energy and willing to make a change.  “Brazil has a lot of good people. There are several interesting governors, new people in politics.  I hope Brazil doesn’t need me anymore.  I hope we have new figures, new women, new men so we can participate in an electoral process”.