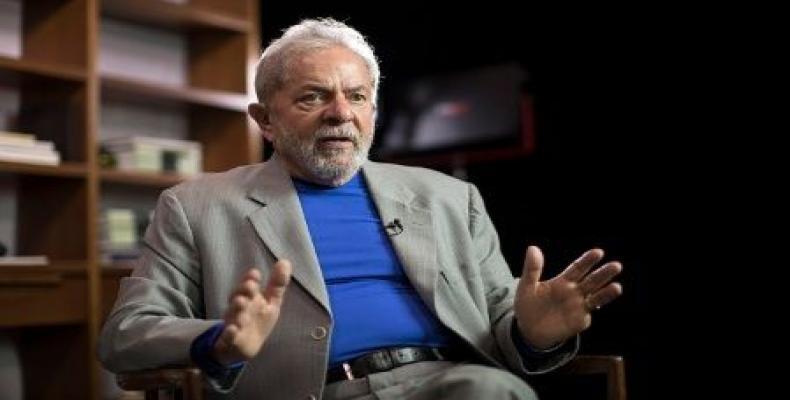 London, May 8 (RHC)-- The British Broadcasting Corporation (BBC) has announced that it will air an interview with former President Luiz Inacio Lula da Silva.  The interview, one of Lula's first since he was imprisoned in April 2018, was recorded by independent journalist Kennedy Alencar, from the Curitiba prison where the politician has been held for over a year.  It was expected to be broadcast by Brazilian media RedeTV that pulled the plug on its airing at the last minute.

"In one of his first and only interviews since being arrested, former Brazilian President Luiz Inacio Lula da Silva speaks with Kennedy Alencar," says the BBC promo of the "Lula: Behind Bars" forthcoming program.

This interview was expected to be broadcast on May 4th by RedeTV, which decided not to air the interview at the last moment with little to no explanation.  As a reaction to this decision, Alencar published a small excerpt of the original recording.

The censorship of the interview surprised many Brazilians since the Federal Supreme Court had previously authorized Lula to be interviewed from inside Curitiba's Federal Prison where he is serving a now shorted sentence of eight years.  Nevertheless, due to the political environment fostered in the country by far-right President Jair Bolsonaro, some media commented that such voluntary "prior restrain" could be related to political pressures.

"If anyone had doubts about how much terror Lula instilled in the fascists' hearts, such doubts disappeared with the war unleashed to prevent the former president from speaking to the people on TV," the Brazilian alternative media Blog da Ciudadania said, claiming that it had received information that RedeTV did not broadcast the interview "due to threats from Bolsonaro's administration."

Self-censorship "occurs when Jair Bolsonaro releases funding numbers for media groups with the purpose of campaigning in favor of the so-called Social Security reform," the Brasil 247 journal commented and recalled that the mainstream media corporations supported the illegal imprisonment of Lula.

The "lawfare" against Lula became evident in 2016 when Judge Sergio Moro, who is now Bolsonaro's Minister of Justice, authorized actions against the former leftist president in a case of money landry and corruption. Since 2018, he remains as a political prisoner, according the American Association of Jurists (AAJ).