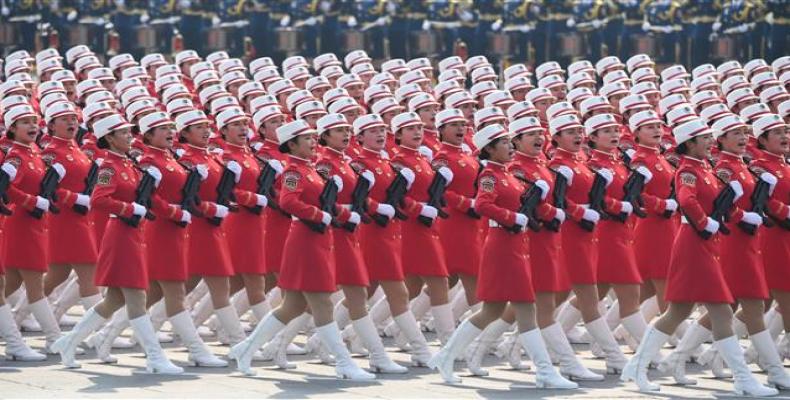 Beijing, October 1 (RHC)-- Over one hundred thousand people participated on Tuesday in a parade at Tiananmen Square in Beijing to commemorate the 70th anniversary of the founding of the People's Republic of China, a celebration which was headed by President Xi Jinping.

The commemoration events began at the door of Tiananmen, where Mao announced to the world the foundation of the People’s Republic 70 years ago. From there, after firing 70 salvoes, the largest military parade in the history of China began.

In this spectacle participated about 15 thousand troops of the People's Liberation Army (EPL), along with more than 160 aircraft and 580 units of war material.

China holds military parades once every decade and they are of great importance, for each one marks the milestones in the country's military development.

Weapons and war material never seen before in public were exhibited at the 2019 event. Among those new weapons, for instances, was the powerful DF-41, a nuclear long-range missile which could reach the United States in 30 minutes.

"On the 70th anniversary of the People's Republic of China, we send a brotherly hug to the brotherly people of Chinese and especially to its president Xi Jinping. Bolivia and China are strategic allies with ties of mutual cooperation and solidarity. We are from the culture of peace and integration."

Some 100 thousand people also participated in a civil parade in honor of those who have led this nation over the last seven decades and have made it the world's second largest economy.
During its march on the Changan Avenue in downtown Beijing, this pageantry was headed by an elaborately decorated float, which resembled a mythical giant bird known as Kun Peng in the Chinese fairytale.

This beautifully arranged vehicle, which symbolized the constant rise of the Chinese nation just like a bird soaring into the sky, started off the formations representing the country's provinces, municipalities and autonomous regions, namely, Hong Kong, Macao and Taiwan.

Each float in the formations featured the most distinctive characteristics and outstanding achievements of these territories over the past 70 years.

"We celebrate 70 years of the Foundation of our older sister the People's Republic of China. A great power that has raised dreams and hopes for decades due to the expansion of its productive forces. My admiration and respect!"

One float named "Building a Community with A Shared Future for Mankind" carried young people from China and other countries, indicating that China cannot develop itself in isolation and neither could the world develop without China, a country which has currently 1.4 billion inhabitants.

There was also a performance by 2,019 members of the Chinese young pioneers, who expressed their ambitions to contribute to the dream of achieving the great rejuvenation of the Chinese nation.
The "Long Live the Motherland" formation was made up of 5,000 people from all walks of life in the capital Beijing.

At the end of the parade, 70,000 pigeons and 70,000 colorful balloons were released to the sky, symbolizing peace and joy.