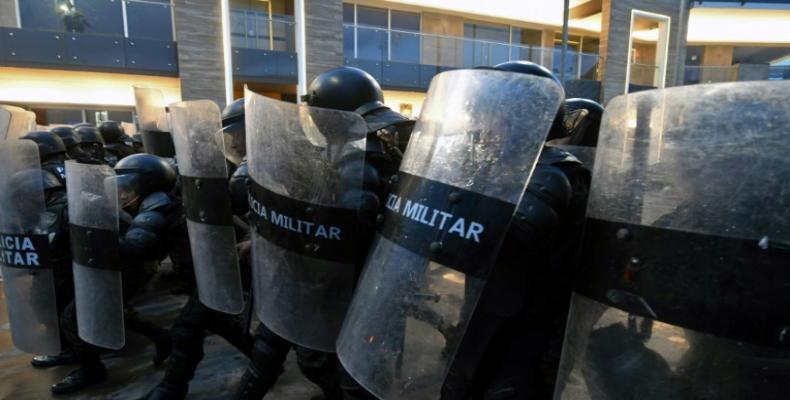 Tegucigalpa, October 11 (RHC)-- Hundreds of protesters gathered in Tegucigalpa’s central park for a peaceful sit-in to demand the resignation of President Juan Orlando Hernandez (JOH) over allegations of drug trafficking and corruption.

Protesters marched carrying their banners; they chanted slogans against the head of state and invited drivers to blow their horns and to make a joyful noise to manifest their dissatisfaction.   The action slowed the traffic as each vehicle stopped to shout "Out Hernandez" and to greet the protesters to the discontentment of the police, who started to exert pressure, threatening to confiscate licenses.

The sit-in lasted approximately five hours and reunited students, teachers, women, and farmers among other sectors of the civil society. The protesters had also done a sit-in in the center of the capital a day before for the same reason.

The protest was developing normally with the area protected by at least 60 police officers. The demonstrators had agreed with them to suspend the sit-in at noon when an officer began abruptly to use tear gas with dozens of others following his action.

Some of the protesters fought back and used stones under the gas smoke to defend themselves.  "If we have an agreement; why are you repressing us?" lawyer Priscila Alvarado asked the security forces who started to push women and to disperse them. The police responded with violence and verbal aggression, telling the women to go “look for a husband” and to “return to their houses,” according to Karen Elvir, a protester who reported the incident to Radio Progreso.

Despite the repression, more mobilizations are announced for the next days, with a coalition of civil groups organizing to urge the president’s departure over a scandal ignited by the accusations of large-scale drug trafficking to the United States, against the president’s brother Juan Antonio "Tony" Hernandez.

The trial is currently held in a New York federal court, and several testifiers declared JOH’s campaign was financed with drug money, and he took millions in bribe from various Mexican drug lords, including the infamous Joaquin “El-Chapo” Guzman.

Hondurans were infuriated by the allegations as Hernandez has been presenting himself as a champion in the fight against drug trafficking.  The anti-JOH demonstrations came some hours after crowds of his supporters participated in a march to back him up.