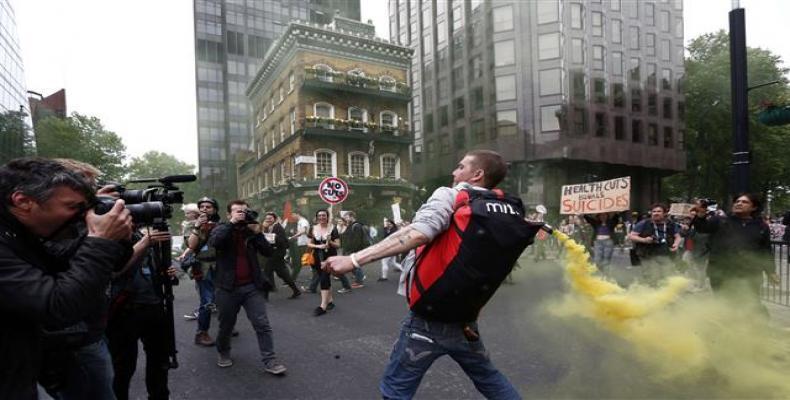 London, May 28 (RHC)-- UK police have clashed with protesters in Westminster protesting the austerity programs of the all-out Conservative government of Prime Minister David Cameron. The protesters say the government's austerity measures and its plan to repeal the Human Rights Act are threatening the country.

Some arrests have been made as students from across the United Kingdom scuffled with police. The march coincides with the state opening of the new parliament where the Conservatives will officially form a new government.

There are reports that similar rallies are taking place in other cities across the country including Liverpool, a traditional hotbed of anti-Conservative sentiment. Other reports say at least six members of parliament supported the anti-austerity demonstration in London.

The protests are the latest in a series of rallies against the victory of the Conservatives in the UK general elections on May 7th. After the results were announced, 15 people were arrested when scuffles broke out between police and protesters outside Downing Street.

The government's proposed measures are expected to include £12 billion in cuts to welfare, a dismantling of human rights laws, limits on strike action and pro-business reform of public services including schools and healthcare.