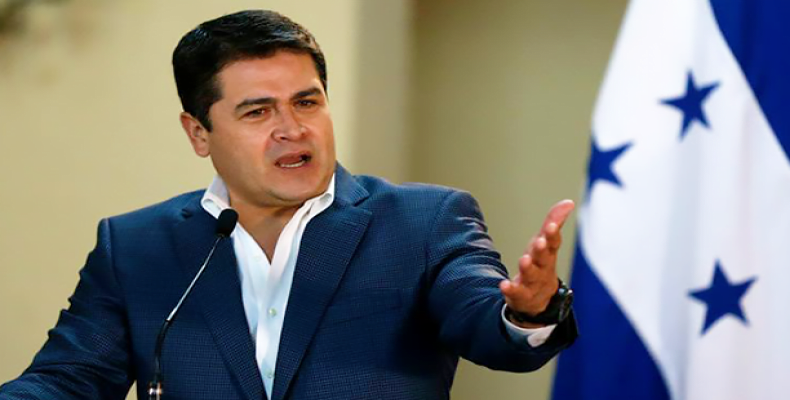 New York, August 5 (RHC)-- Honduran right-wing President Juan Orlando Hernandez has been implicated as a co-conspirator in a drug trafficking and money laundering case against his brother, according to a document filed in New York’s district court.

The 44-page report, which is related to the upcoming trial of Tony Hernandez in New York's Southern District on mainly drug trafficking charges, summarizes some of the key evidence collected by prosecutors, as Univision reported.

In it, the court refers to Juan Orlando Hernandez (JOH) as CC-4, (Co-conspirator 4), who is described as having been "elected President of Honduras in late 2013" and former president Porfirio “Pepe” Lobo is identified as CC-3 (Co-conspirator 3). Lobo was Hernandez’ mentor and oversaw his rise to power.

As connections with drug traffickers from the Honduran Valle Valle cartel and Colombian contacts were strengthen, Tony Hernandez partnered with Alexander Ardon, a former mayor of El Paraiso from JOH’s party. Ardon then became a Cooperating Witness, identified in the document as CW-3, who prosecutors argue “was also a large-scale drug trafficker.”

The document goes on to affirm that Tony Hernandez “told CW-3 [Ardon] that they could form a particularly successful partnership based on protection from CC-3 [Lobo] and CC-4 [JOH] if the won in the 2009 elections, and that he believed CC-4 [JOH] would succeed CC-3 [Lobo] as the president of Honduras and continue to protect them.”

Prosecutors then claim that Juan Orlando Hernandez asked Ardon for $1.5 million in drug trafficking money to fund and secure the presidency in 2013.  The money was used for cash bribes to Honduran officials as well as gifts and favors to local politicians to secure his win, prosecutors maintain.

Links to drug trafficking against JOH are not new.  As drug-related extraditions to the U.S. began in 2014, the then-police commissioner, General Ramon Sabillon, publicly accused JOH of protecting Ardon. Sabillon was relieved from duty and had to fleed the country due to death threats.

Due to public pressure, President Hernandez removed Hugo Ardon, Ardon's brother, from his government post, yet maintained close relations with the family asking for funding for the highly questioned 2017 election.

Then in 2018, Tony Hernandez -- the Honduran president's brother -- was arrested in Miami in November.  Fabio Lobo, the son of former president Lobo was convicted of drug trafficking in 2017 and sentenced to 24 years in jail.

Hernadez issued a statement over the weekend, denying all allegations and saying that they are attacks made by drug traffickers.  Despite implications against JOH in the document, prosecutors have not accused him of any crime committed in the United States.  Juan Orlando Hernandez is a good friend of U.S. President Donald Trump, from whom he hopes to get a pardon if ever extradited.