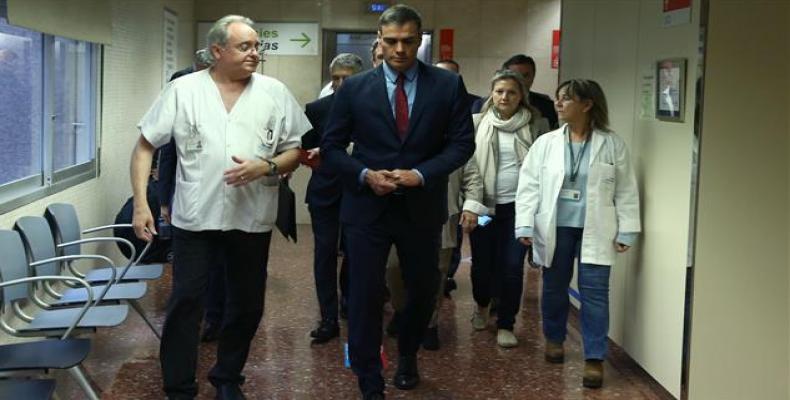 Barcelona, October 22 (RHC)-- Spain’s acting prime minister Pedro Sanchez made a quick visit to Catalonia on Monday after a week of separatist unrest but spurned the pro-independence regional chief, accusing him of failing in his duty to restore order.

The northeastern region has been hit by seven consecutive nights of sometimes violent protests following the jailing last week of nine Catalan separatists found guilty of sedition over their role in leading a failed 2017 bid for independence.

The atmosphere was generally calmer on Monday, as several hundred people gathered in front of the Catalan Interior Ministry. The protest was called by Committees for the Defense of the Republic (CDR) an umbrella group of different organizations, who dubbed it a “balloon party”.

Protesters, mainly youths, threw balloons filled with paint into the air, and some threw them at police vans.  Others held up their phones to shed light and played card games on the street.

During his visit to the regional capital Barcelona earlier on Monday, Sanchez met police injured in the violence.  The pro-independence regional chief, Quim Torra, had sought a meeting with Sanchez but was rebuffed.

The unrest is a challenge for Sanchez, who faces a parliamentary election next month, but also for the pro-independence regional authorities based in Barcelona.

Hundreds of peaceful protesters sang the Catalan anthem on Monday and waved placards urging Sanchez to “sit and talk” with Torra.

The center-right pro-union Ciudadanos Party, which was born out of opposition to Catalan separatism, holds a rally in front of Catalonia's regional government headquarters in Barcelona.

The government has said talks are impossible until Torra condemns the violence unequivocally. In a letter released by Sanchez’s office on Monday, the prime minister accused Torra of failing in his duties to protect public safety, and said Torra had “turned his back” on the security forces.

In a written reply, Torra asked for “dialogue without conditions”. His response made no mention of the violence. Torra had said on Saturday he has always condemned violence.

Footage shot by onlookers on Monday showed Sanchez being booed by members of staff as he left a Barcelona hospital where he had been visiting police injured in the clashes.

In a video published by La Vanguardia on its website, hospital staff, some wearing white coats and scrubs, could be heard shouting “freedom for political prisoners” while holding up a sign calling for the release of the jailed separatists.

The issue of Catalan independence has dominated Spain’s fractured political debate in recent years and is likely to continue to do so in the run-up to next month’s ballot.

Spanish media reported that Torra tried to talk to Sanchez by telephone on both Saturday and Sunday, but was rebuffed.

A spokeswoman for the pro-independence party Esquerra Republicana de Catalunya (ERC), which is allied with Torra’s group, condemned Sanchez for not talking directly to the Catalan government.

“Sanchez is refusing dialogue for the umpteenth time.  (This shows) disrespect to the people of Catalonia,” Marta Vilalta Torres said.