Venezuelan President to Spanish Prime Minister: Who's the Dictator Now? 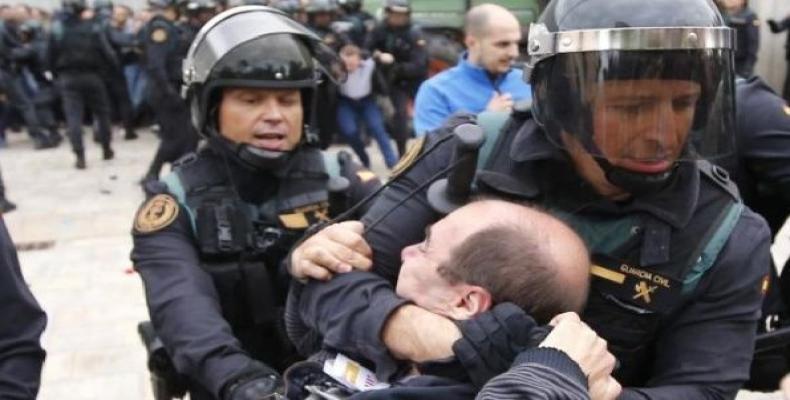 Caracas, October 3 (RHC)-- Venezuela's President Nicolas Maduro has attacked Spanish Prime Minister Mariano Rajoy for the violent crackdown on the banned Independence referendum in Catalonia.  "Who is the dictator now?" Maduro said, on a broadcast on the television network, VTV.

"Mariano Rajoy has chosen blood, sticks, blows, and repression against a noble people.  Our hand goes out to the people of Catalonia.  Resist, Catalonia!  Latin America admires you," the president added.  Maduro also criticized Rajoy's threats against the 947 Catalan mayors, 75 high-ranking officials, as well as the heads of the public media and the local police for expressing support for the independence vote.

Spain has been a harsh critic of the Venezuelan government, accusing Maduro of steering away from the path of democracy.  Just last week, Venezuela's Foreign Minister Jorge Arreaza slammed the Spanish government for its hostility towards Venezuela, arguing that U.S. and Spain were intervening in Venezuela's internal affairs.

Maduro's criticism of the Spanish government has been backed by other world leaders and organizations.  Human Rights Watch released a statement calling on the Spanish authorities to respect the right of their citizens to peaceful assembly and refrain from using excessive force.

U.K. labor leader Jeremy Corbyn has called the state violence, "shocking" and urged "the Spanish government must act to end it (violence) now."  Corbyn also asked for other European Union leaders to intervene.  "I urge Theresa May to appeal directly to Rajoy to end police violence in Catalonia and find a political solution to this constitutional crisis," he said on Twitter.

Calling for sanctions against Spain for its crackdown, Catalan ministers have announced that they would approach the international court to attain justice.  "We will initiate formalities to activate the mechanisms of sanctions ... We think that the actions of the Spanish state that the whole world is witnessing, put the image of the EU as a guarantor of democracy and human rights at risk," Raul Romeva, Catalan minister of foreign affairs, said at a news conference in Barcelona.