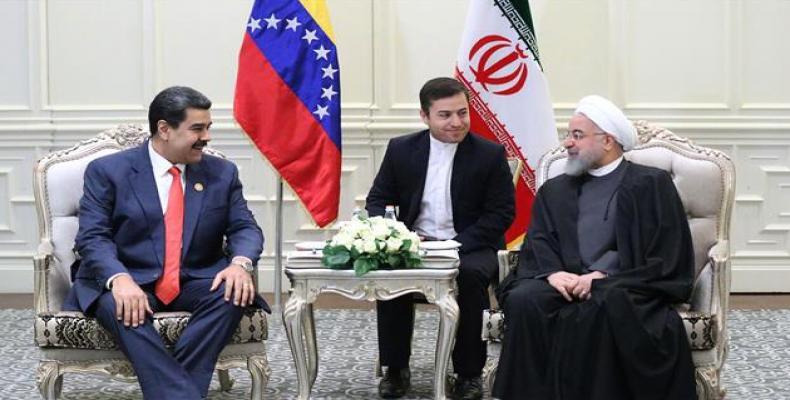 Baku, October 26 (RHC)-- Iranian President Hassan Rouhani has praised the "resistance of the Iranian and Venezuelan nations" against U.S. attempts to target the two countries, calling for an expansion of bilateral relations between Tehran and Caracas.

"Iran and Venezuela have and will continue to back each other in all international and political bodies," Rouhani said during a meeting with Venezuelan President Nicolas Maduro on the sidelines of the 18th Non-Aligned Movement (NAM) Summit in Azerbaijan's capital of Baku on Friday.

"We are ready to provide Venezuela with our experience in technical areas such as cyber platforms, new technologies and also agriculture in addition to strengthening cooperation in financial and banking sectors," Rouhani said.

Rouhani stressed that Iran has successfully countered Washington's bid to target Tehran through economic sanctions and regional pressure.  "Most of Iran's economic indicators have been positive in recent months," Rouhani said, adding that "the Americans have not been able to achieve success in any of their plans in our region, from Iraq and Syria to Palestine, Afghanistan and Yemen."

Addressing U.S. attempts targeting the two nations and other non-aligned countries, Nicolas Maduro said: "Today all independent countries have formed an extensive front against the extremist and radical measures of the United States."

The remarks by the two presidents come as Iran and Venezuela have endured major economic and political pressure seeking to weaken the countries.