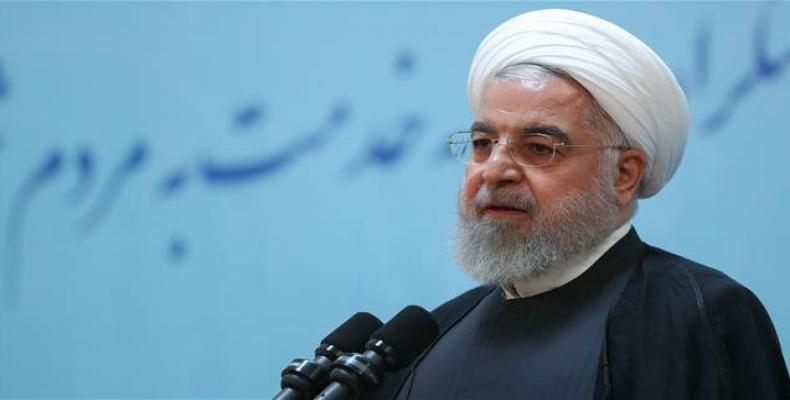 Tehran, September 3 (RHC)-- Iranian President Hassan Rouhani has ruled out holding any bilateral talks with the United States and threatened to further cut commitments to the country's crumbling nuclear deal with world powers within days.

In an address to parliament on Tuesday, Rouhani, however, said that if Washington lifted all sanctions it reimposed on Iran after withdrawing unilaterally from the 2015 deal, then it could join multilateral talks between the remaining signatories to the landmark accord.

Tensions between Washington and Tehran have been rising since May last year following US President Donald Trump's controversial decision to pull out of the deal and the subsequent reimposition of crippling sanctions aimed at strangling Iran's economy.

Trump, although applying "maximum pressure" on Iran, has offered to meet its leaders and hold bilateral talks with no pre-conditions.  The two countries were on the cusp of confrontation in June when Iran downed a US drone and Trump ordered retaliatory attacks before cancelling them at the last minute.

In his remarks, Rouhani also said Iran was ready to further reduce its commitments to the accord for the third time "in the coming days" if current negotiations with European signatories to the deal yielded no results by Thursday.

"If Europeans can purchase our oil or pre-purchase it and we can have access to our money, that will ease the situation and we can fully implement the deal ... otherwise, we will take our third step," he said.  In response to the U.S. sanctions, Iran has already increased its uranium enrichment and stockpiles.

Al Jazeera's Dorsa Jabbari, reporting from Tehran, said the third countermeasure is signaled to be the strongest step taken in scaling back Iran's commitment to the nuclear deal.  "And because of this they expect very strong international reaction from the international community," she said.

European parties to the deal have struggled to save the deal by shielding Iran's economy from the sanctions, as well as calm the deepening confrontation between the US and Iran.   France has been leading efforts to reduce tensions, with President Emmanuel Macron expressing hope during G-7 talks in late August of organising a meeting between Rouhani and Trump.

Rouhani has had a series of phone calls with Macron in recent weeks aimed at salvaging the nuclear deal.   A conservative Iranian MP said Macron had proposed offering Iran a $15 billion credit line on condition it returned to the fold.  "Macron has proposed Iran stop its third step for now in exchange for this sum, and maybe retreat from its first and second steps to the initial situation," Ali Motahari was quoted as saying by Iran's Tasnim news agency.

The nuclear deal was agreed between Iran and the so-called 5+1 - United Nations Security Council permanent members Britain, China, France, Russia and the US plus Germany.  Its future remains unclear following the withdrawal of Washington and against the backdrop of renewed US sanctions.

Iranian authorities have said the next step against sanctions would be "stronger" and might include enriching uranium to 20 percent or restarting mothballed centrifuges, machines that purify uranium for use as fuel in power plants or, if very highly enriched, in weapons.

Iran has increased its stockpile of heavy water and has increased the level of its enrichment of uranium beyond the limits allowed under the agreement.