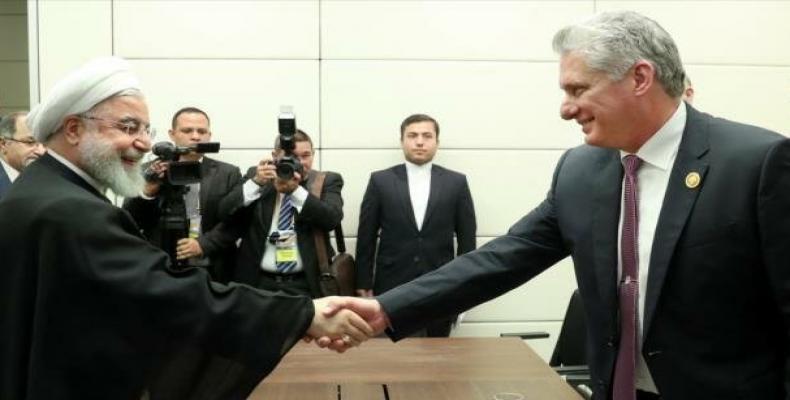 Baku, October 27 (RHC)-- Iranian President Hassan Rouhani has praised Cuba's historic resistance to U.S. attacks and pressures.  During a meeting with Cuban President Miguel Díaz-Canel, on the sidelines of the 18th Summit of the Non-Aligned Movement in Azerbaijan, Rouhani stated that both Tehran and Havana continue struggling against U.S. imperialist ambitions.

The Iranian president said: "There is no doubt that our two countries will continue to face these attacks together, and the arrogance of Washington cannot stand up to our resistance."

Hassan Rouhani also referred to the friendly bilateral relations between his country and Cuba, while emphasizing our similar positions such as support for the cause of the Palestinian people and against the Israeli Zionist regime and the strengthening of the Non-Aligned Movement.

Cuban President Miguel Diaz-Canel, for his part, ratified the readiness of Cuba to extend historic and strong relations with the Islamic Republic.  Cuba, Diaz-Canel said, strongly condemns Washington's hostile policies against Iran, and especially recognizes the danger to humanity from Washington's exit from the 2015 nuclear deal between Tehran and six world powers.