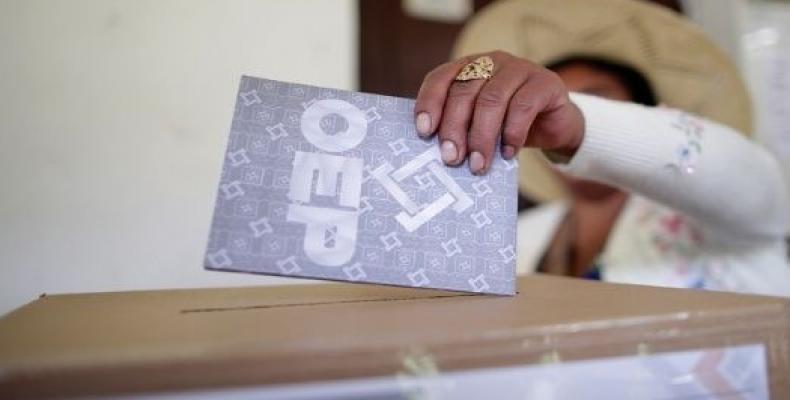 La Paz, October 30 (RHC)-- The Organization of American States (OAS) audit of the electoral process in Bolivia is scheduled to begin on Thursday and the results will be binding, the Bolivian government announced Wednesday.

Bolivian Foreign Minister Diego Pary explained to the media in La Paz that during this day the signing of the agreement between the government of the country and the OAS is planned, electronically, so that tomorrow the "integral audit" of the elections of October 20th would begin.

Pary said the audit will take place since the vote of Oct. 20, 2019, and later phases.  "This process will allow to resolve all doubts about the outcome of the electoral process," he said.

After reading the points of the agreement between the Bolivian government and the organization, Pary pointed out that the result of the audit report will be binding on both parties.  He also stressed that "the team of experts will deliver a report with the result of the electoral audit, to the OAS Secretary-General, who will send it to the government of Bolivia through the corresponding diplomatic channels."

"Bolivia will guarantee all facilities for the proper compliance of the audit to the official vote count of the 2019 general elections," Bolivia's top diplomat said.

In addition, the Bolivian foreign minister reiterated the invitation to countries in the region and other parts of the world with the objective that they can accompany the audit process.

"Spain, Mexico, Paraguay have been invited to also be able to accompany this electoral audit process that the country is carrying out," he said.

The audit of the results of the 2019 general elections of Bolivia will be carried out after observers from the European Union and the OAS made a request to the country's Supreme Electoral Tribunal to verify the results of the elections that saw Evo Morales score a first-round victory with 47 percent of the votes, and over 10 percent over the runner-up Carlos Mesa.

Mesa has called for protests against the results of the election and refused to recognize Evo Morales' victory.  The government has invited him to participate in the international audit.