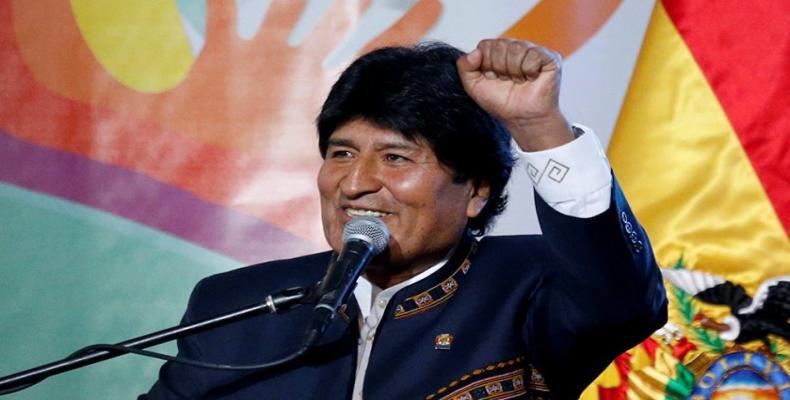 La Paz, October 24 (RHC)-- President Evo Morales announced Thursday morning that he has won the presidency for another term without a need for a second round in Bolivia’s general elections.  The official count by the electoral authorities showed him surpassing the 10 percent over the threshold needed for a first-round victory, with 98.70 percent of the votes counted.

With only 1.3 percent of the vote to be counted, Evo Morales has 46.9 percent, while his closest contender -- former president Carlos Mesa -- garnered 36.6 percent.

During the press conference in La Paz, the Bolivian president said that his margin of victory cannot be reversed because the only remaining votes are in rural areas that support him.

The incumbent's victory became apparent late in the counting process due to the fact that votes from rural Indigenous areas tend to be the last to be counted and have traditionally been in favor of Evo Morales.  "Disregarding the vote of the poorest, of the Indigenous, is a form of racism," said the president at Thursday morning's press briefing.

Evo Morales went on to lament the tense opposition discourse during the campaign.  "We have to point out that such a level of lies and hatred, created by the opposition and some other groups, is unheard of.”

Bolivia’s opposition has so far not responded to the victory.  Up until last night, opposition candidate Carlos Mesa said he did not recognize results and distrusts the electoral authorities. Likewise, the U.S. State Department warned of what it called "serious consequences" against Bolivia, citing supposed "irregularities" in preliminary projections, which are different to the live vote count which no observers have raised issues with.

Morales reiterated his invitation for international bodies, including the Organization of the American States (OAS), to audit the full results.  “We have passed from a colonial state to a plurinational state thanks to the Bolivian people.  We are living a moment of political liberation.  We recovered democracy in 1983 and today we are living through Bolivia’s best moments.”