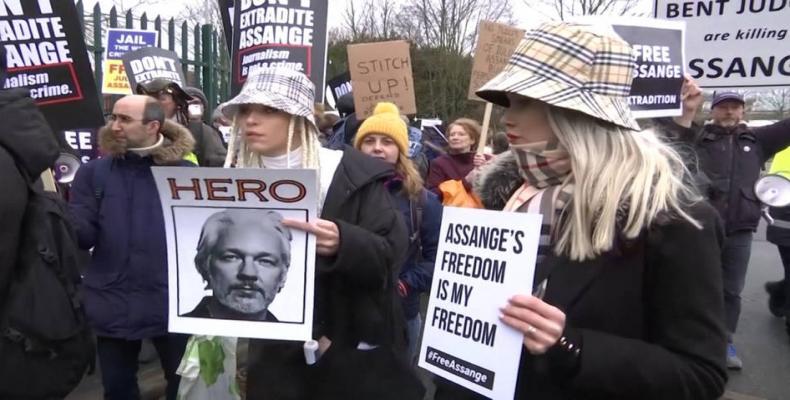 London, February 25 (RHC)-- Wikileaks founder Julian Assange's lawyers Tuesday denounced that their client was mistreated in prison after he left the extradition hearing held at the Woolwich Crown Court in London.

"Assange was handcuffed 11 times, stripped naked twice and had his case files confiscated," his lawyer Edward Fitzgerald said.  "The case files, which the prisoner was reading in court on Monday, were confiscated by the guards when he returned to prison later.  That same night he was placed in five cells," he added.

Assange's defense team appealed to Judge Vanessa Baraitser to consider such treatment as it was harming his "right to a fair trial and his ability to participate in the proceedings."  This opinion was also supported by James Lewis QC, the Queen's Counsel who is acting for the U.S. authorities in this case.

"I do not want Assange to be held in a condition or experience treatment that jeopardized his right to a fair hearing."  In response to the complaint, Judge Baraitser said she did not have "the legal power to comment or rule on Assange's conditions," but encouraged the defense team "to formally raise the matter with the prison."

"I think everyone in the court agrees that this is a fair hearing," Baraitser said, and concluded that "I would expect Assange to be treated in a way that protected his right to a fair trial."

Given that Donald Trump's administration has pointed to Assange as an enemy of U.S. who "must be brought down," his lawyers have been defended that his life could be at risk if he is forced to face a trial in the United States.