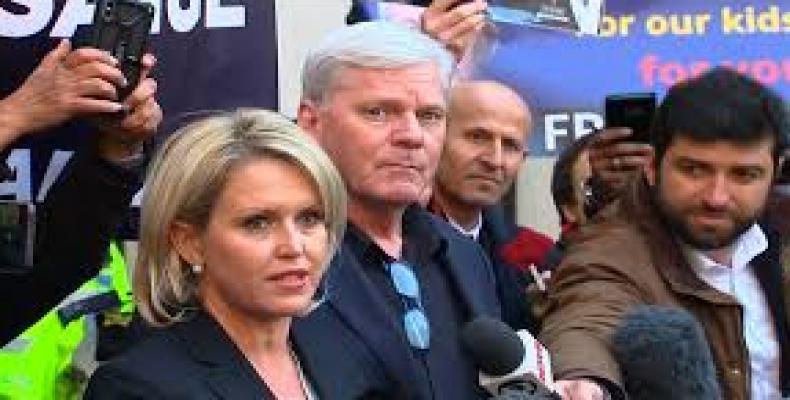 Quito, April 12 (RHC)-- According to reports from Quito, the Ecuadorean capital, Julian Assange is facing extradition to the United States over his role in the leaks revealing war crimes related to U.S. wars in Iraq and Afghanistan. The Wikileaks founder has reportedly been charged with "computer hacking conspiracy" in the United States.  But media report say that U.S. prosecutors filed conspiracy charges against Assange for trying to access a U.S. government computers containing classified information in 2010, along with former military intelligence analyst Chelsea Manning. Assange faces a maximum prison sentence of five years, the Justice Department said in a statement.  The founder of WikiLeaks was arrested on Thursday by British police and evicted from the Ecuadorian embassy, after the South American country abruptly ended seven years of asylum, in a decision that his followers described as illegal. The Minister of Foreign Affairs, Jose Valencia, defended the position of President Lenin Moreno saying that "Ecuador has complied with International standards and international law" and that the country has "Requested [to the British government] that Assange not only not face the death penalty, but not face torture or abuse if he is extradited." Swedish prosecutors now say they have filed a request to re-open an alleged rape case against Assange.  "Following today's media reports that Julian Assange has been arrested in London, the legal counsel in Sweden has requested that the Swedish preliminary investigation regarding rape be reopened,” the prosecutors said.  He was accused of rape by a Swedish woman but the case was dropped in 2017. The U.K. police released a statement on Thursday, confirming that Assange was arrested “on behalf of the United States authorities,” according to Yahoo news. Massimo Moratti, Amnesty International’s Deputy Director for Europe Research released a statement saying: “Amnesty International calls on the UK to refuse to extradite or send in any other manner Julian Assange to the USA where there is a very real risk that he could face human rights violations, including detention conditions that would violate the absolute prohibition of torture and other ill-treatment and an unfair trial followed by possible execution, due to his work with WikiLeaks.” The Foreign Minister of Ecuador Jose Valencia Amores said at the National Assembly that they have assurances from the U.K. government that Assange will not be extradited to the United States.  Democratic Senator Joe Manchin told CNN about Assange’s arrest: "We're going to extradite him. It will be really good to get him back on United States soil.  So now he's our property and we can get the facts and truth from him." Ecuador's former President Rafel Correa said: "It’s incredible.  We cannot imagine something like this.  It’s against international law; it’s against the institution of asylum; it’s against the Ecuadorian constitution, especially because since last year, Julian Assange has had Ecuadorian citizenship."  And Rafael Correa added: “It’s the biggest betrayal perhaps in Latin American history."  Glenn Greenwald, a journalist from the U.S. who published intelligence documents of the U.S. and U.K. disclosed by Edward Snowden, said corporate U.S. journalists hate Assange because of his bold act of going against U.S. government and its security agencies and publish something which had a worldwide impact.  The indictment against Assange "contains the same words typically seen in Espionage Act charge. Prosecutors are clearly accusing Assange of aiding and abetting espionage, but they're trying to do it within charge for computer crime."  Kristinn Hrafnsson, editor in chief of Wikileaks and Julian Assange lawyer Jennifer Robinson says Assange intends to fight U.S. extradition request.