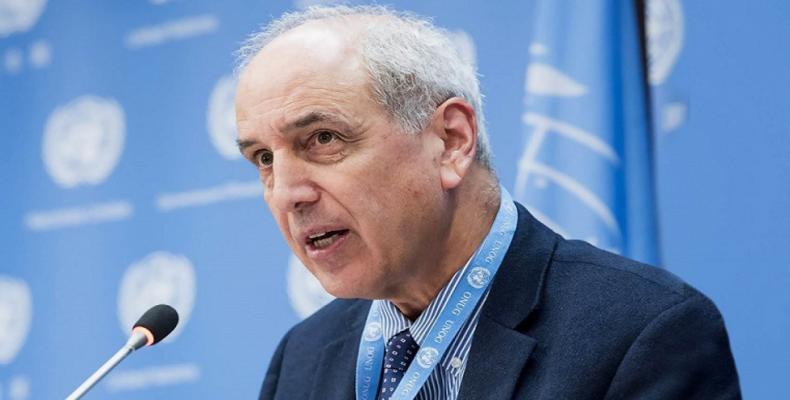 United Nations, July 20 (RHC)-- A UN human rights expert says the Israeli regime must end its “collective punishment” against Palestinians, which is “most strikingly seen” in its persisting siege against the Gaza Strip.

"It is an affront to justice and the rule of law to see that such methods continue to be used in the 21st century and that Palestinians collectively continue to be punished for the actions of a few,” said Michael Lynk.

Lynk, who is the special rapporteur on the situation of human rights in the Palestinian territories, also warned that Israeli punitive actions are harming millions of innocent people on a daily basis.

“These practices entail serious violations against Palestinians, including the right to life, freedom of movement, health, adequate shelter, and an adequate standard of living,” the UN official further said, after he submitted a report to the 44th session of the Human Rights Council this week.

Gaza has been under Israeli siege beginning in June 2007.  Since 2008, Israel has waged three wars against Gaza, where two million Palestinians live under a 12-year Israeli blockade.  Thousands of Gazans have been killed in each of these deadly wars.

The crippling blockade has caused a decline in the standard of living as well as unprecedented levels of unemployment and unrelenting poverty in the Gaza Strip.

“The extent of the devastating impact of Israel’s collective punishment policy can be most strikingly seen in its ongoing 13-year-old closure of Gaza, which now suffers from a completely collapsed economy, devastated infrastructure, and a barely functioning social service system,” Lynk further said.

Elsewhere in his remarks, the UN official touched on Tel Aviv’s condemned policy of demolishing Palestinian homes in the occupied West Bank, stressing that such practice is in clear violation of Article 53 of the Fourth Geneva Convention.

“Since 1967, Israel has destroyed more than 2,000 Palestinian homes, designed to punish Palestinian families for acts some of their members may have committed, but they themselves did not,” Lynk said.

Israeli authorities usually demolish Palestinian homes in the occupied West Bank, claiming that the structures have been built without permits. They also sometimes order the Palestinian owners to demolish their own homes or pay the demolition costs to the municipality if they do not.

“In fact, these demolitions only further contribute to an atmosphere of hate and vengeance, as the Israeli security leadership has itself acknowledged,” the UN rights expert said in conclusion.