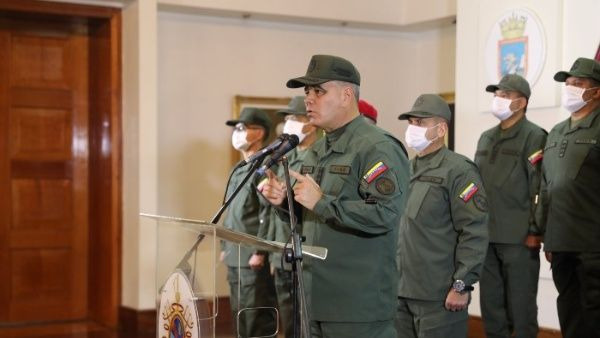 Caracas, February 18 (RHC)-- The Venezuelan Minister of People's Power for Defense, Vladimir Padrino López, issued a statement Thursday at a press conference on behalf of the Bolivarian National Armed Forces (FANB) in response to aggressions coming from Colombia.

"We are sworn to take care of our people, take care of our democracy and our constitution," Padrino Lopez said.  The Bolivarian leader issued harsh criticisms against Colombian President Ivan Duque, whom he accused of continued actions of violating Venezuela's territorial sovereignty.  "He has outgrown his presidential suit, that pseudo-president Iván Duque," he stated.

"Colombia acts as a big military camp," he said, denouncing before the international community that a new attempted terrorist attack against the new Venezuelan parliament is being organized from that territory.  He also called attention to the border conflicts between both nations which is abandoned by the Colombian State.

According to the commanding general of the FANB, crimes and planned acts of war, assassinations and attempted armed incursions under mercenary contracts have been organized from Colombia.

He pointed out that Colombian Intelligence, with the sponsorship of the Central Intelligence Agency (CIA) of the United States, has tried to recruit more than 538 Venezuelan military personnel through bribes and pressures.  However, he highlighted, the maneuver has been totally unsuccessful.

The Colombian government has insisted in pointing out that the dissidents of the Revolutionary Alternative Force of the Common (FARC) and the National Liberation Army (ELN) have camps in Venezuelan territory, for which its president Iván Duque announced the creation on February 26th of an elite command to combat the former insurgents.

In view of Duque's statements, Venezuelan President Nicolás Maduro warned that he will not allow them to dare to touch even a millimeter of Venezuelan territory and urged the Armed Forces to "clean the barrels of their rifles" to answer as necessary.

The FANB ratified that it does not sponsor or tolerate the presence of armed groups in Bolivarian territory, regardless of their nationality and that if it notices their presence, they would be neutralized or expelled from the country.