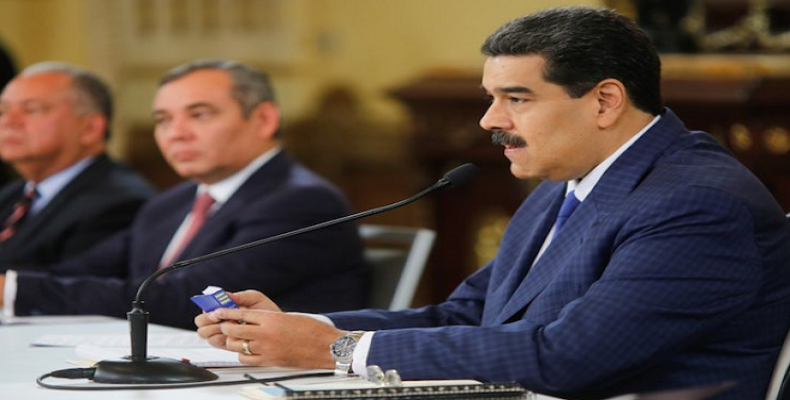 Caracas, September 10 (RHC)-- Venezuelan President Nicolas Maduro has denounced Colombia’s militaristic stance towards Venezuela, attacking its “public spaces and military headquarters.”  The president said the nation's Defense Council discussed a security plan on Monday against the threat of war by the Colombian government.

During an address to the nation, President Maduro made clear that between January and April, the Colombian government has tried to overthrow his government in the interest of the United States.

The Venezuelan president says that Colombian President Ivan Duque, under the orders of former president Alvaro Uribe who Maduro said last week is the “one who really holds the power in Colombia,” is making excuses for the nation’s failed peace agreement, and is responsible for 42 acts of aggression on Venezuela over the past three months, including attacks on Venezuelan air and missile defense systems.

The head of state said neighboring Colombian government is recruiting of Venezuelan officers and non-commissioned officers with the intention of attacking the Venezuelan air and missile defense system.  Maduro says that the Venezuelans involved in the attacks are "selling out their nation."

During his brief speech, the president said that Colombia’s media is acting like a “war machine,” against which “Venezuela has to defend itself with the truth, and to defend its sovereignty.”  He added: "We want to preserve the sovereignty, the right to peace and the right to the future of this Bolivarian Venezuela."

President Maduro emphasized that "Colombia is a failed state that hates Venezuela, and ... wants to create conflict between our two nations," but the president called for bells of peace rather than trumpets of war.  "With Ivan Duque, they declared war on the Bolivarian Revolution.  It has been impossible for a minimum of relations and communications in two governments that are obliged to engage in."

The president also emphasized that Venezuela fully cooperated in the Colombian peace agreements, despite suffering the consequences of the armed conflict, and the “failure of the agreement is the fault of the Colombian government, not Venezuela’s."