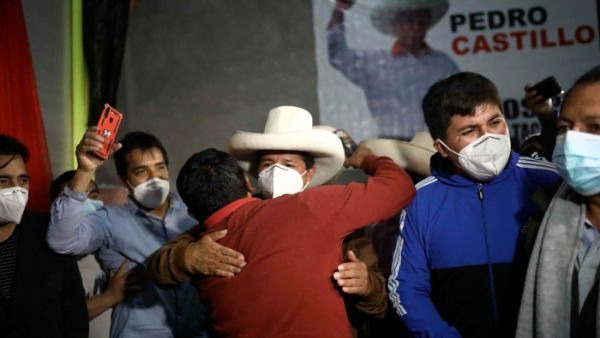 Pedro Castillo, of the Peru Libre party, affirmed that "the great alliance must be made with the Peruvian people." | Photo: EFE

Lima, April 12 (RHC)-- The candidate of the Peru Libre party, Pedro Castillo, leads the elections held on Sunday in the South American country, however, his percentage of votes obtained is insufficient to win the presidency in the first electoral round.

The National Office of Electoral Processes (ONPE) reported on its Twitter account that no aspirant surpassed 50 percent of the votes, a requirement to avoid a second electoral round, and indicated that, with 36 percent of the tallies counted, Castillo has 15.87 percent of the votes, which would ensure his participation in the runoff scheduled for next June 6th.

Castillo's rival in the next electoral contest will emerge from among presidential aspirants Hernando de Soto, of Avanza País, who has 14.47 percent of the votes counted; Rafael López Aliaga, of Renovación Popular (13.13%) and Keiko Fujimori, of Fuerza Popular (12.18%).

There are 14 other candidates who participated in the Peruvian presidential race, however, none of them reached 10 percent of the vote individually.

The president of the National Jury of Elections (JNE), Jorge Luis Salas, estimated that it will be next May that the official results of this Sunday's election day would be available, and then the candidates that will dispute the presidency of the country will be known for sure.  "We believe that we could have everything resolved, know who will go to the second round (presidential), the first week of May, and we would know who will go to Congress in the last week of May", declared Salas to the state television station TV Peru.