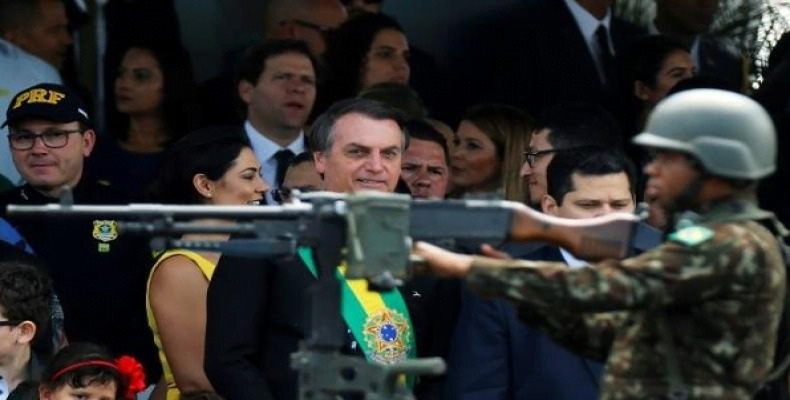 ​Bolsonaro threatens to send in the troops​

Brasilia, April 25 (RHC)-- Brazilian President Jair Bolsonaro warned that he would send troops into the streets to ensure order in case the restrictive measures ordered by the governors to deal with COVID-19 promote what he called "chaos."

"If we were to have problems, we have a plan on how to enter the field (...). I am the supreme chief of the armed forces.  Our Army, our Armed Forces, if necessary, we will go into the streets," he said in the middle of an interview to local TV stations.

Bolsonaro again criticized the restrictive measures taken by the governors of Brazil, a country that is currently experiencing a coronavirus pandemic out of control, and called the confinements, quarantines and curfews "absurd" and "cowardly."

"If I decree it, it will be enforced.  Our armed forces can go to the streets one day, within the four lines of the Constitution, to enforce the fifth article" of the Magna Carta, referring to individual liberties, emphasized the Brazilian head of state.

He added that, however, he cannot "extrapolate" and would not give more "information" about his plan, but stressed that he has already submitted it for discussion with his 23 ministers.  "We have talked about it; what to do in case a generalized chaos is implemented in Brazil because of hunger; because of the cowardly way some people want to impose those measures, with certain restrictive measures so that the people stay indoors."

Bolsonaro is a former military man nostalgic for the military dictatorship of 1964 and 1985 in Brazil. These statements are made in the context of the pressure he is receiving from the population and opposition leaders for his disastrous management of the COVID-19 global health crisis, with a toll of 386,000 deaths and 14,200,000 contagions throughout the country.