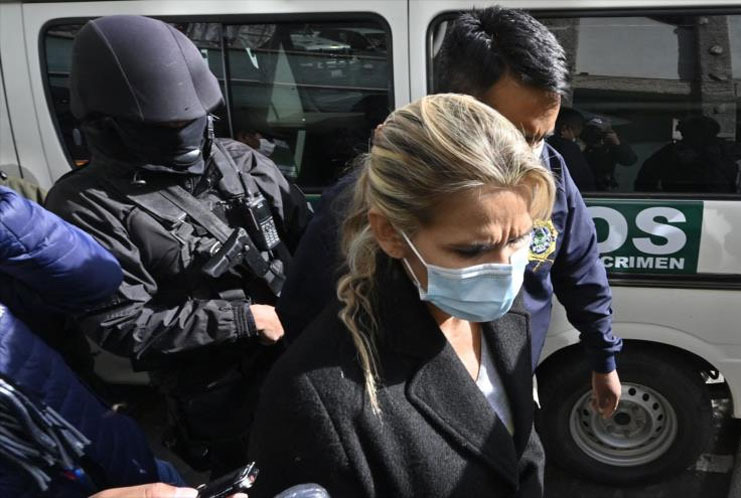 La Paz, November 5 (RHC)-- The Bolivian Prosecutor's Office charged this Thursday the former de facto president, Jeanine Áñez, for the commission of five crimes associated with the appointment of Karina Leiva Áñez as manager of Empresa de Alimentos y Derivados (EBA) in May 2020, and requested to extend her preventive detention for another six months.

For that designation, Áñez faces charges of illegal appointments; resolutions contrary to the Constitution and the laws; breach of duties; anticipation or prolongation of functions; and complicity, since according to the investigation, Leiva Áñez, lacked experience and a university degree to perform functions in such a high position.

The Public Prosecutor's Office added in its argumentation that such appointment, which occurred during the coup d'état of 2019, was in correspondence with personal interests, in addition to the fact that the president had some degree of kinship with the proxy.

Given the absence of professional competences to occupy such position, such appointment resulted in mismanagement and losses for concepts of economic damage to the company EBA.

The indictment for the EBA case was signed by the prosecutor Manuel Saavedra, while the decision on whether to approve or not the request for preventive imprisonment issued by the Prosecutor's Office will be defined in the hearing of precautionary measures.

Áñez has been held since last March in the Miraflores penitentiary in La Paz, and if this new arrest warrant is approved, she would face the third period of preventive imprisonment, after two similar measures for the coup d'état I and coup d'état II cases.

The issue will be defined by means of an appeal that will take place before a Criminal Chamber of the Court of the city of La Paz.