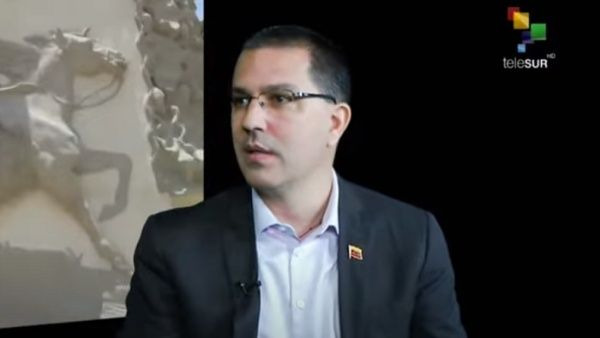 The diplomat indicated that there is "a Miami-Colombia axis that is present" in the Haitian assassination and in the 2020 mercenary incursion in Venezuela. | Photo: teleSUR

Caracas, July 28 (RHC)-- The Venezuelan Minister of Foreign Affairs, Jorge Arreaza, asserted on Tuesday that there is a need for union among the countries of the Americas to consolidate integration and sovereignty.

During the program "Cruce de Palabras," broadcast by teleSUR, he indicated that "we are still in the campaign for the first independence.  It has been extended more than it should be with the existence of empires that work to divide us or prevent us from existing nations with their own identity."

"There is a need to unite, to integrate, because the costs of disunity, of disintegration are infinite.  To the north, we have the United States, and to the south we have the disunited states of Our America.  We have to evaluate the conditions to do it in a solidary, humane, sustainable and self-sufficient way," said the Venezuelan foreign minister.

Likewise, he explained that the U.S. could not impose itself in the world after the fall of the Soviet Union, which has led to the emergence of powers such as China and Russia, as well as other nations in Asia, Europe and, in spite of their difficulties, in Africa.

"We have to join together; if we don't do it today, in 200 years we will not exist as an identity," he said.  "We are not a threat to the U.S. because we have neither missiles nor arsenals nor a policy of war in the world, but in the realm of ideas, of politics, of what may be possible -- of course we are a threat."

Furthermore, he stressed that "no matter who is sitting in the Oval Office of the White House, it is the system and imperialism, which is not only the U.S. and its government, it is the corporations, the network of interests for war, health, energy, which make the big decisions."

Regarding the relationship with the current .S. Administration, he detailed that "there is less pressure, there are no new sanctions, but they have not lifted any.  There is a different communication, in other terms, although still with the tensions and differences of the case".

Regarding the impact of the leader of the Bolivarian Revolution, Commander Hugo Chávez, he assured that he was the one who took the Liberator Simón Bolívar down from the statues.  "He incorporated him to the masses and put him at the forefront."

"Bolivar was ahead of his time.  He bet on something that was not viable at that time, but the conditions are being given today.  It is more urgent than ever, because the multipolar, pluripolar world is in the making," he commented.

Arreaza stated that they are still trying to evaluate the impact of the Commander in Venezuela, because he has been the variable that the imperialists do not calculate at the time of attacking the country or the Bolivarian Revolution.  "And the impact in our America is difficult to calculate because he awakened consciences and hearts", he emphasized.

On the other hand, he indicated that the socialism promoted by Comandante Chávez is based on "our indigenous roots, with our history of freedom (...) It does not exclude the private sector, it contemplates an economy with a large public, private and community sector".

Arreaza specified that the assassination of President Jovenel Moïse, which took place last July 7th, carried out by a commando of mercenaries integrated by Colombians, Americans and Haitians, represents "a brutal barbarism."

"The assassination of a president with mercenaries trained in another country, paid by another country (...) is barbarism, it is brutal. Those responsible must pay with justice," said Venezuela's top diplomat, and added that it is a coincidence with what happened in May 2020 in a Venezuelan coastal town, when mercenaries tried to enter to attack national government figures.

"There is a terrible coincidence. A Miami and Colombia axis that is present.  A U.S. security company in Florida, in both cases", said the Minister of Foreign Affairs, and indicated that the issue was discussed at the XXI Meeting of Foreign Ministers of the Community of Latin American and Caribbean States (CELAC).

"In the CELAC meeting, we spoke with other colleagues and said that we must treat this with great prudence and rigor, to prevent Colombia from becoming not only a major exporter of drugs, but also of violence through mercenaries," he warned.