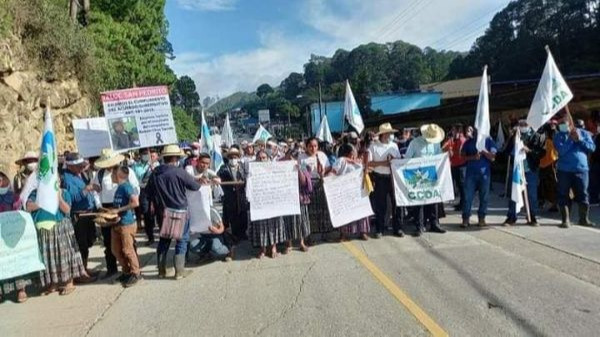 The indigenous peoples have remained in the streets of Guatemala to make their demands heard. | Photo: Ancestral Authorities of Guatemala

Guatemala City, August 6 (RHC)-- Social movements, farmers, students and other sectors of the population continued Thursday with demonstrations in various parts of Guatemala to demand the resignation of President Alejandro Giammattei.

Convened by Autoridades Indígenas Ancestrales Ixmulew, under the slogan "Paro Plurinacional 5A", those attending the mobilization also demanded the reinstatement of Juan Francisco Sandoval as head of the Special Prosecutor's Office against Impunity (FECI).

"At each point, the leaders are going to evaluate the weather situations, the security issue, to be withdrawing, mostly in the afternoon.  Activities will resume this Friday," said the representative of the Altiplano Campesino Committee, Leocardio Juracán.

Also participating in the demonstrations are the Association of University Students (AEU), transport workers, and other unions, which have made their presence felt in front of the Plaza de la Constitución, headquarters of the Guatemalan Public Prosecutor's Office.

Among the causes of the mobilizations are the popular rejection to the approval of the 2021 budget by the Congress, which included cuts in education, health and justice.   Also, the alleged corruption crimes and the questioned integral management of the Government presided by Giammattei in the confrontation of the Covid-19 pandemic.