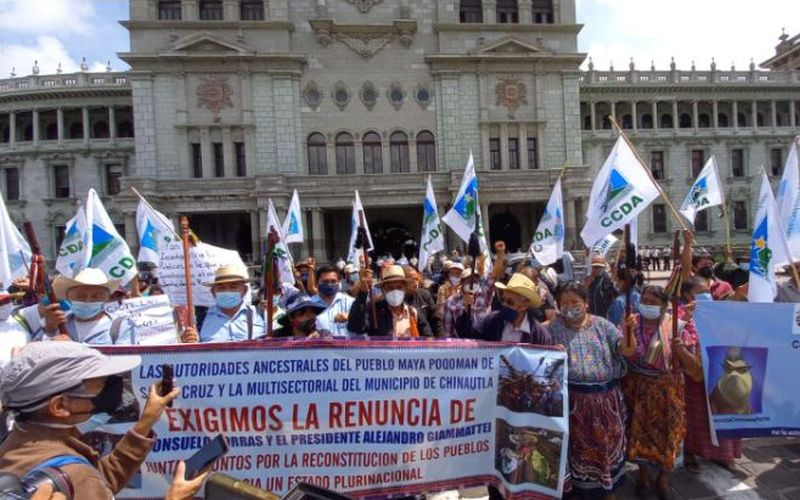 Protesters denounce acts of corruption and mismanagement by Giammattei.​

Guatemala City, August 21 (RHC)-- Social movements, peasants, students and other sectors of Guatemala have demonstrated again to demand the resignation of the president, Alejandro Giammattei, and the attorney general, Consuelo Porras, as well as the cessation of human rights violations against indigenous communities.

This is the fourth day of protests called by the Ancestral Indigenous Authorities in the national territory.  The General Directorate of Protection and Road Safety (Provial) registered concentrations in Cuatro Caminos, San Cristóbal, in the department of Totonicapán; in Sanarate, El Progreso; cruce de la Virgen, Tecún Umán, and in cruce del Monumento, San Lorenzo, department of San Marcos.

For its part, the Association of University Students Oliverio Castañeda de León (AEU) called for protests in the Plaza de la Constitución, so that "indignation is the reason for mobilizing and we do not allow ourselves to be instrumentalized by the same predatory elite".

In the mobilizations and peaceful road blockades, officials of the National Civil Police were present, who indicated that they were on site to prevent the blockades.

The demonstrators organized by the 48 cantons of Totonicapán and Ancestral Authorities denounced that a group identified as "vendors of La Terminal," belonging to the market in Zone 4 of the Guatemalan capital, came to the place to dissolve the protest with sticks and machetes, and pronouncing threats.

Elements of the National Civil Police, guard several points of the Guatemalan territory where in previous weeks protests were registered to demand the resignation of President Alejandro Giammattei Falla and the head of the Public Prosecutor's Office. pic.twitter.com/77fi6AXCgT