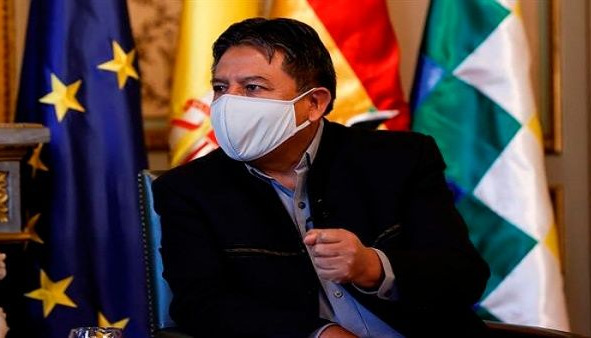 David Choquehuanca recalled in Madrid that in the context of the coup d'état, severe human rights violations were committed against the Bolivian people. | Photo: EFE​​

Madrid, October 2 (RHC)-- The Vice President of Bolivia, David Choquehuanca, who is on an official visit to Spain, denounced this Friday in Madrid that the international community was silent about the coup d'état that occurred in the South American nation in 2019, and that some media misrepresent statements of Bolivian leaders to create confusion about what is happening in his country.

During the EFE-Casa de América Tribune, the dignitary recalled that the coup d'état articulated by the local right wing and external allies interrupted a democratic process of almost 40 years.

He said that from that moment on, "Bolivians have lived through days of mourning, political persecution, torture, violation of human rights.  And the international community has remained silent and has not denounced these facts."

The Bolivian vice president recalled that a panel of independent international experts, at the request of the government of President Luis Arce, investigated these incidents and revealed that in Bolivia "there were executions, torture and human rights violations."

He said that "all this makes us demand that the countries make a statement and this is sometimes misinterpreted by some media."  In this regard, he stressed the importance of knowing the truth through direct communication, because "it will help us overcome any misunderstanding, because these problems arise through self-interested interpretations."

Choquehuanca is making his first official visit to Spain.  On Thursday, the Bolivian vice president met at the Zarzuela Palace with King Felipe VI.  Through a press release, the Bolivian Embassy in Spain valued that the meeting was marked by a cordial tone that reflects the good relations between both countries.

The Bolivian leader met with the Minister of Social Rights and Agenda 2030 of the Spanish Executive, IIone Belarra, during which they talked "about the challenges that the peoples of the world face today, especially those related to the fight against climate change and food sovereignty."

He also held meetings with the President of the Senate, Ander Gil; the Minister of Foreign Affairs, European Union and Cooperation, José Manuel Albares; the former President of the Spanish Government, José Luis Rodríguez Zapatero, as well as with leaders of political and trade union organizations.