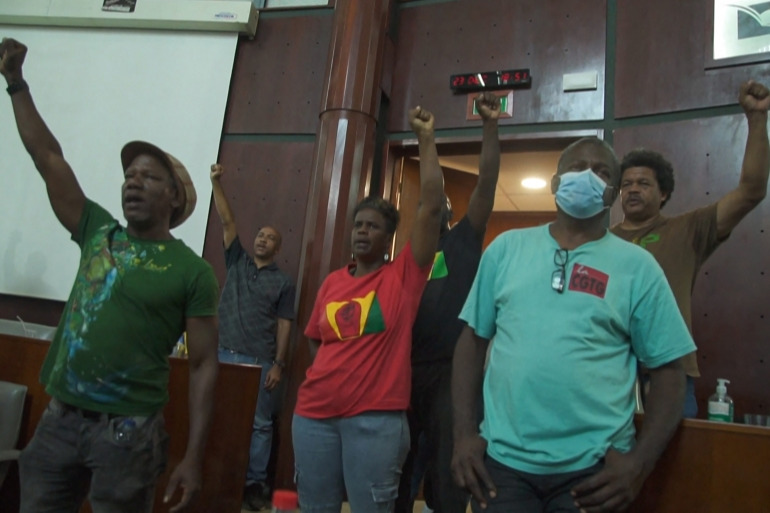 Trade unions and other protest groups helped organise the occupation of the Regional Council in Basse-Terre, on the French Caribbean island of Guadeloupe [Benedicte Jourdier/AFP]

The demonstrators first entered the debating chamber of the regional council while it was meeting on Thursday.  Councillors were able to leave peacefully.   Several stayed the night and decided to continue their action into Friday, but with Christmas looming, they began to leave the chamber at 1 p.m. local time (17:00 GMT).

They plan to meet again on Monday to prepare a new action next week, Elie Domota, a union leader and chief of the LKP association, told the AFP news agency.   Regional Council President Ary Chalus agreed to a meeting with some of the protesters’ representatives, the council also tweeted after Thursday’s incursion.

Officials in Guadeloupe and Paris denounced the protest action as an unacceptable threat to the democratically elected body, however.  “No demand justifies hindering the smooth running of an assembly of elected officials in the middle of a plenary session,” France’s Overseas Territories Minister Sebastien Lecornu wrote on Twitter.

Labour unions and a group calling itself the Collective Against Exploitation want the French government to abandon a measure ordering health workers to be suspended without pay unless they are vaccinated against COVID-19.

Inside the council building, protesters had strung a banner reading “No to Obligatory Vaccination, No to the Health Pass,” according to images posted online by local officials. A Christmas tree was shown knocked over.

Protesters in Guadeloupe are also seeking better access to clean water, pension and wage increases, and more job opportunities, as the COVID-linked demonstrations brought longstanding grievances to the surface.

They want to negotiate with Paris over the crisis, but officials have so far indicated that there can be no talks as long as such protests are carried out.  Coronavirus vaccination rates in France’s Caribbean territories are far lower than those in mainland France, and there are concerns that a new wave of infections linked to the fast-spreading Omicron variant could lead to serious problems.

Vaccinations are mandatory for all French health workers and a “health pass” is required to enter all restaurants and many venues in France.  The measures have met the stiffest opposition in Guadeloupe and Martinique, reflecting long-running frustrations over inequality with the French mainland.

The crisis brought Guadeloupe to a standstill last month when protesters set up barricades around main roads.  France sent dozens more special forces troops to the island following rioting, looting, and gunfire directed at police officers during protests against the COVID-19 measures.

One-third of Guadeloupe’s population lives below the poverty line, and the cost of living is higher than on the French mainland.  Water supplies have been a serious problem in recent years because of obsolete pipes.

Anger over France’s handling of a toxic pesticide in Caribbean banana fields has also fuelled mistrust in the government’s COVID-19 vaccine policies, along with misinformation shared on WhatsApp or Telegram groups.