Venezuela demands the return of its assets held abroad 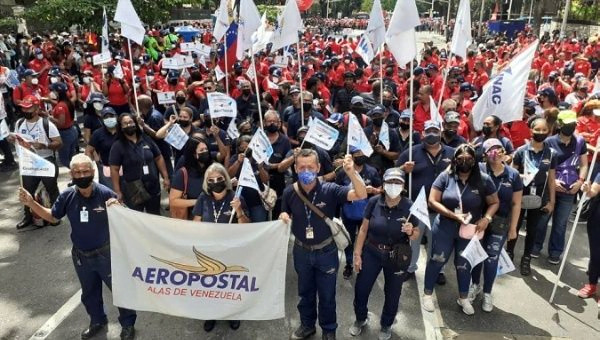 The mobilizations seek to show the international community that the Bolivarian people reject actions such as the retention of the gold reserves of the Venezuelan Central Bank carried out by England, the appropriation of the assets belonging to CITGO Petroleum Corporation, and the retention of a CONVIASA plane in Argentina.

"Enough of abuses against Venezuela!" Maduro said and announced that the Venezuelan State will implement international actions for the recovery of all the country's assets abroad.

In June, Uruguayan aeronautical authorities revoked the overflight permit granted to Aerocargo of the South (EMTRASUR), a transport company which is a subsidiary of the Venezuelan Consortium of Aeronautical Industries and Air Services (CONVIASA).  This happened while one of its planes was flying to Caracas.

The Venezuelan aircraft then had to return immediately to the Ezeiza Airport in Argentina. To date, however, the Boeing 747-300 and its cargo have not returned to Venezuela.  Although Argentinean authorities did not find anything illegal nor did they make any accusations against the crew, the plane is still stranded in Argentinean territory.

"Now they intend to steal a plane from us due to an Imperial court in the state of Florida," President Maduro pointed out, explaining that the cargo aircraft played a fundamental role "in the life and humanitarian care of Venezuela."