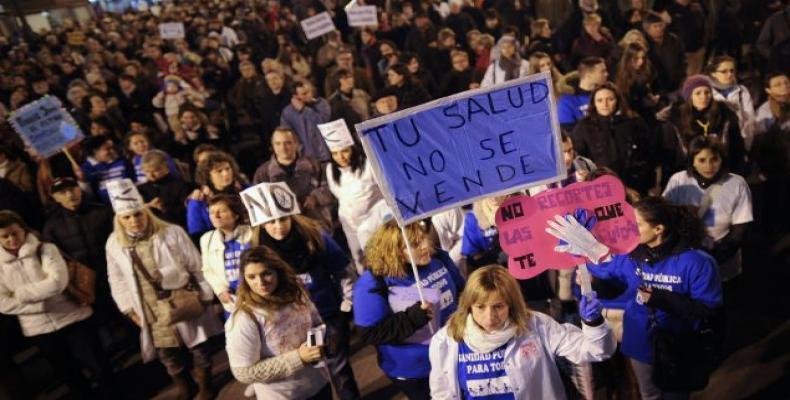 Madrid, December 22 (RHC)-- Thousands of people have staged a demonstration in Spain to protest against the government's austerity cuts squeezing the health sector. On Sunday, Spanish health care workers marched through the streets of Madrid to voice their opposition to the cuts imposed by current and previous governments. The protesters argued that the belt-tightening measures have put lives at risk.

The Spanish economy, the fourth largest in the 18-nation eurozone, is suffering from the aftershocks of a real estate bust that has devastated not just banks but families as well. Battered by the global financial downturn, the Spanish economy collapsed into recession in the second half of 2008, taking with it millions of jobs.

Spain's health sector has been hit hard by the austerity policies introduced by the right-wing government of Prime Minister Mariano Rajoy, which are aimed at bringing down the country's fiscal deficit to more manageable levels. Spain has been hit by a wave of anti-austerity demonstrations and strikes since the country's economy plunged into recession.

The country has been struggling to deal with its worst economic crisis since the Second World War. In recent years, the government has increased taxes, frozen public salaries and limited spending on services such as education and health care.