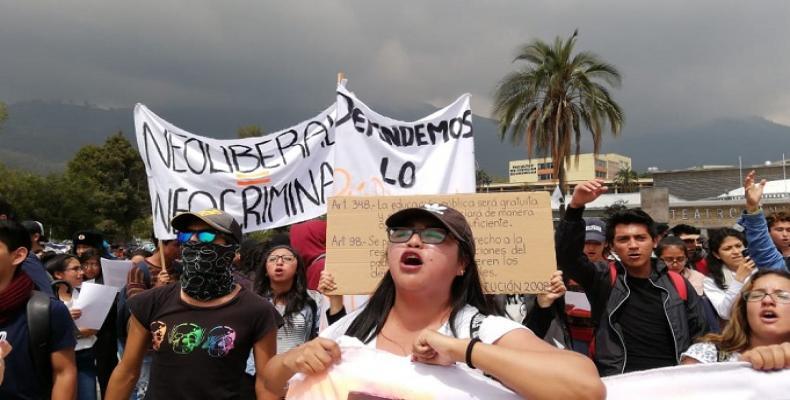 Quito, November 20 (RHC)-- Students from Ecuadorean public and private universities took to the streets of Quito on Monday for a peaceful protest to demand that the government halt austerity measures in higher education, contained in the recently announced projected State General Budget (SGB) for 2019, by the Ministry of Economy and Finance.  The austerity measures come in a series of moves by the current government to promote what students deem neo-liberal policies.

The aim of student mobilization is to prevent the State from going forward with the proposed budget cuts in order to safeguard the constitutional rights of the youth of the country, irrespective of whether they are enrolled in public or private universities.  “Defense not of public universities, but of the education system as a whole,” Zakiel Cárdenas, a student of Pedagogy and Philosophy at Salesiana University and a representative of FEUPE, told teleSUR.  It is not just the quantitative burden that prompts the students to march in the streets of Quito, but also “how the University is conceived, whether some opt for paying [for private education], it is a constitutional right,” he added.

The nearly 10 percent budget reduction will have concrete effects. Santos warns that there will be concrete reductions in entry quotas, scholarships, funding, the hiring of qualified teachers, among other, in which the country’s public education students will be the hardest hit.

Low-income students in private universities would also be subject to impacts from the austerity measures, according to students. At the private Salesiana University, in Quito, scholarships are offered at rates such as “80, 50, 25 percent [reductions in tuition],” the measures may directly affect students that depend on them, and as result “we would see a strong wave of decrease [in student enrollment] because students base their economic planning [budget for education] on what they are currently paying,” Cárdenas told teleSUR.

For its part, the education ministry believes the government is “going in the right direction” by reducing the government budget for 2019.  “Perhaps we can speed up, but here we have to be very cautious. The speed…is what could complicate things” and, fiscal adjustment, in line with World Bank direction, is believed to be positive for the economy, “it [fiscal adjustment] is less complicated for the economy…a gradual and ordered adjustment, because that is what we have to do now, we have to disassemble what has been assembled before [during ex-president Rafael Correa’s government], and if we do it at once we can have economic problems,” the minister told Teleamazonas news agency.

For the students who are directly impacted by the cuts, the urgency to revert the trend of austerity is immediate, “This is not an isolated cut, it responds to a larger context of budget cuts directed by the State [as exhibited in the SGB], of trying to reduce the [national debt] deficit in a completely aggressive way, which is not just creating a superficial effect, but [with an impact on ] structural bases…which affect development directly,” Pablo Gomez, at the Pontifical Catholic University, an economics student, and vice president of the association of the School of Economics, member of FEUPE.

“3.3 billion are contemplated in the budget for health, education, things related to social inclusion, issues related to job generation,” an advisor to the Minister of Finance told Teleamazonas. The public official believes the government is acting with “concern” about the everyday necessities of “not only the big [economic actors]” but “all those who have difficult conditions in everyday life…that is also what this budget reflects.”

The government’s positive view of the austerity measures, stands in stark contrast to students concerns, and they are determined to stand up for what they believe is an infringement on their constitutional rights as citizens, not as public or private university students: “As students, we are not going to allow government to touch [the budget on] education.”

"This affects public [universities directly] because they are financed directly by it, but we [private universities] are also affected as we are co-financed. The state gives the Catholic University a percentage…from which all of us students who have the social scholarship [one based on income] benefit as we earn discounts [on tuition].  But it is also a question of empathy, my sister studies at the Central University [the main public University of Ecuador] my cousins will eventually study there,” said Gomez to teleSUR.

As per the budget approval process, the projected budget has been sent to the National Assembly for their revision and approval.  On the first round of reviews, the Assembly observed that the State should keep the same amount destined for education which was destined for the fiscal year 2018. The final discussions on this issues are taking place at the National Assembly, as the final November 30th deadline to approve the projected SGB (2019) approaches.

In context, many Latin American countries have been subject to austerity measures, impacting education, as the case is in Argentina, Colombia, and Brazil, which has ignited multitudinous protests from all sectors of society.

Such austerity measures are typically taken as a pre-condition to accessing International Monetary Fund’s loan packages, an institution which prescribes ‘gradual’ adjustments based on austerity measures.  However, as can be seen from popular manifestations in the above-mentioned countries, including Ecuador, the effects are felt “aggressively” on the very social fabric, in the livelihoods, and every day to day life of the population.