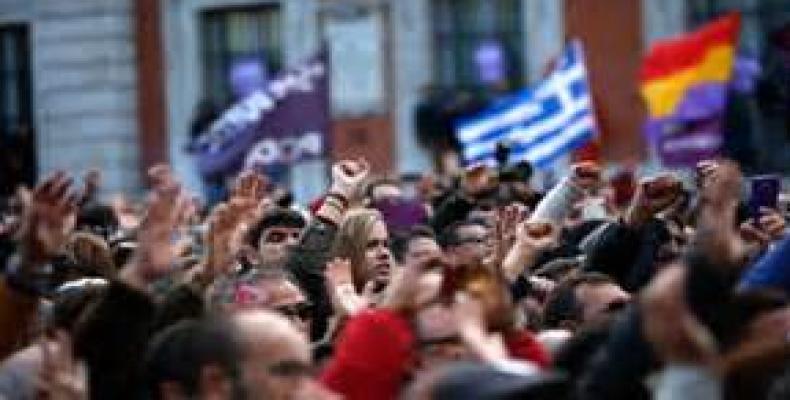 Athens, February 16 (RHC)-- Thousands of people have taken to the streets of Greece's capital, Athens, and other cities in protest against the government's austerity policies at the hands of foreign creditors. The massive protest in Athens took place on Sunday as people from all walks of life marched on the parliament, chanting slogans and demanding an end to the impoverishing austerity policies.

According to protest organizers, the government's measures have caused major disruptions in their lives, including an exodus of young people facing unemployment at home. Other demonstrations took place in the cities of Thessaloniki, Patras and Volos as well as on Crete Island.

Several anti-austerity protests have erupted across the country recently, ahead of a meeting in Brussels on Monday, when finance ministers of the European Union discuss Greece's enormous debt. On Friday, February 13th, Greece and its international creditors commenced technical talks based on reforms required to maintain the country's finances, with hopes of raising the possibility of an interim compromise deal.

Over the past days, Greece's new leaders, whose leftist Syriza party stormed to victory in the January 25th elections, have toured Europe to garner support for reconsideration of the terms of the country's $240-billion (USD 270-billion) bailout, which it received in 2010 in return for imposing harsh austerity measures.

The measures have forced people to endure multiple tax increases, along with cuts in pensions and salaries. The demonstrations come as newly-elected Greek Prime Minister Alexis Tsipras has declared an end to the austerity program imposed by Greece's creditors: the European Union, International Monetary Fund and European Central Bank.