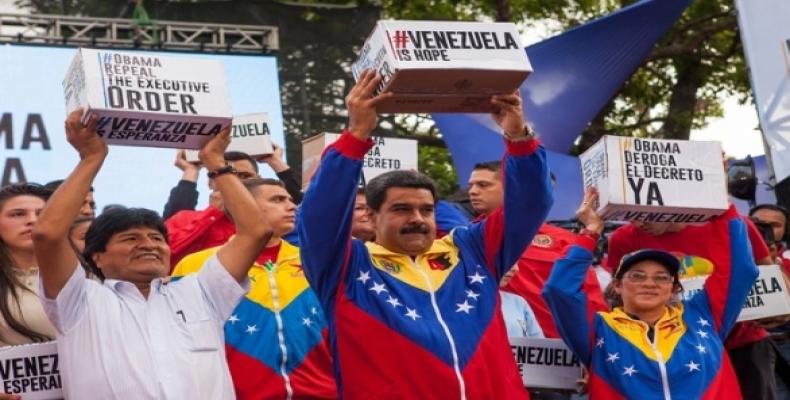 Following the issuance of the decree, Maduro launched a campaign seeking 10 Million signatures from Venezuelans demanding the decree be repealed, saying he would present them to the U.S. President Barack Obama at the Summit of the Americas in Panama.

Speaking to thousands who marched to the Palace of Miraflores in Caracas, Maduro stated that Obama, who earlier in the day told a press conference that Venezuela was not considered a “threat” by the U.S., had changed his mind. The Venezuelan leader nonetheless still praised the Venezuelan people for the level of mobilization against the U.S. move.

“All my respect for this great unity, in such a short period of time, receiving over 10 million signatures, this is proper unity, this is the anti-imperialist people,” said Maduro.

Maduro also praised the support received from the Union of the South American Nations (UNASUR), the Movement of Non Aligned Countries, the Community of Latin American and Caribbean Countries (CELAC), as well as the G77+ China, as proof that Venezuela was not isolated.

Morales also addressed the crowd, saying that the U.S. aggression was not only directed against Venezuela “but also against Bolivia and all Latin America.” The Bolivian president, who is set to travel with Maduro to the Summit of the Americas, added that Washington is trying to divide the region, “because they want to steal from us and sack our natural resources ... We cannot forget how they use to subdue us with military dictatorships and neoliberal policies.”

Electoral authorities in Venezuela have confirmed the authenticity of the signatures, with a margin of error of 1.3 percent.