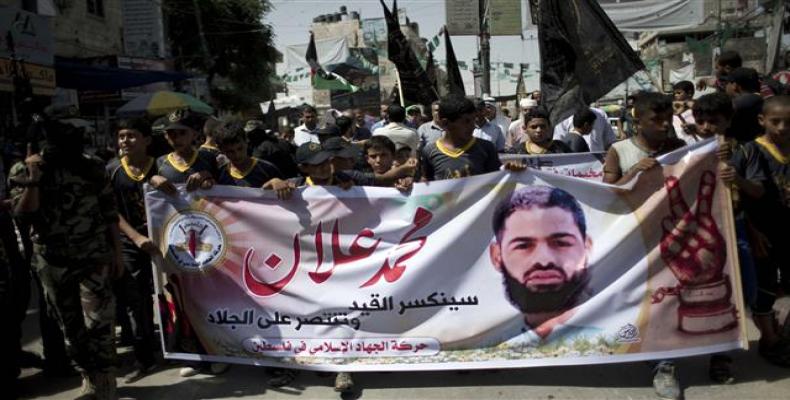 Ramallah, August 20 (RHC)-- The Israeli regime has freed a Palestinian prisoner who has been on hunger strike against his incarceration without charge or trial.

Israel on Wednesday suspended the detention order against Mohammed Allan, releasing him in a move that his family and friends hailed as a victory. "I feel very happy," said his brother, Amid Allan. "I hope that my brother will rise from his bed in healthy condition, as happy as he used to be when they took him from his house." Meanwhile, Allan's lawyer said his client remains unconscious.

Israel's ruling has not addressed what would happen to Allan if he recovers, saying only he can petition for his release if his condition improves. Allan has been on hunger strike for 65 days to protest Israel's practice of holding suspects indefinitely, without charge or trial, in a practice known as administrative detention.

Rights groups say the overused measure violates international law. The much-protested case took a new turn earlier Wednesday after Israeli authorities ordered medical tests to determine if Allan's brain had been damaged due to the hunger strike. Doctors said the results of an MRI were inconclusive.

More than 7,000 Palestinians are reportedly incarcerated in 17 Israeli prisons and detention centers, many of them without charge or trial.

Israel also recently passed a bill allowing the force-feeding of hunger-striking prisoners. Critics of force-feeding, however, see it as not only a means of torture, but also an unethical violation of the subject's autonomy.