Angry Protests as Japan Resumes Work on U.S. Base in Okinawa 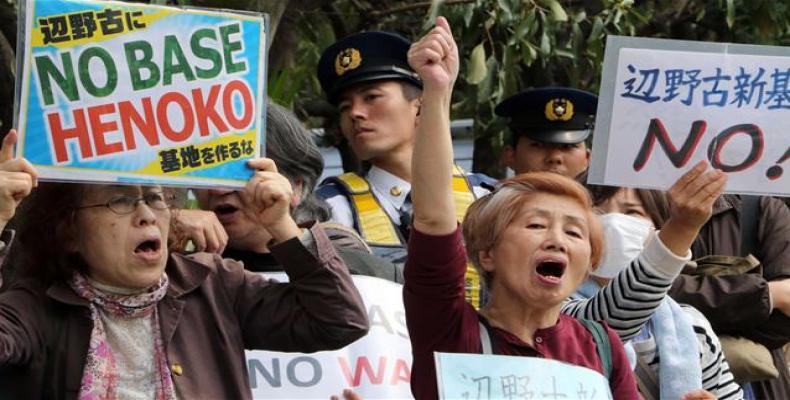 Tokyo, September 14 (RHC)-- Anger is mounting as the Japanese government has resumed work on the construction of a controversial new U.S. military base in southern Okinawa following a month-long suspension.

The government resumed work on the construction of the base on the island of Okinawa over the weekend. Almost one month of talks between Tokyo and Okinawa officials opposed to the plan failed to reach a compromise.

The resumption prompted Takeshi Onaga, the outspoken governor of Okinawa, to issue a statement, saying the move was "extremely regrettable." Onaga has vowed to "take every possible step to block" the construction of the new U.S. military facility.

Okinawa’s residents have long been critical of the U.S. military presence on the island. On Saturday, a large number of demonstrators staged a mass protest in the Henoko district in central Okinawa, where the government of Prime Minister Shinzo Abe plans to build a replacement facility for the U.S. base.

However, both Washington and Tokyo have repeatedly backed the relocation plan, with the Abe administration insisting it has been "the only solution."

The United States plans to move the Marines Corps' Futenma air base to a more remote coastal area called Henoko in Nago City to consolidate the presence of its troops in Okinawa.

The two governments in Washington and Tokyo first agreed in 1996 to relocate the base from a more congested part of Okinawa to Nago, but opposition from local people and environmental groups has prevented construction in the small town of nearly 60,000 people.

About half of the U.S. forces in Japan are based in Okinawa. Many locals have complained about base-related crimes, noise and the risk of accidents. The opposition by local residents also comes against the backdrop of the issue of sexual assaults by U.S. military personnel in Japan, as many offending soldiers receive either no or very light punishments.

U.S. military personnel have reportedly been involved in more than 1,000 sex crimes between 2005 and 2013 in Japan.