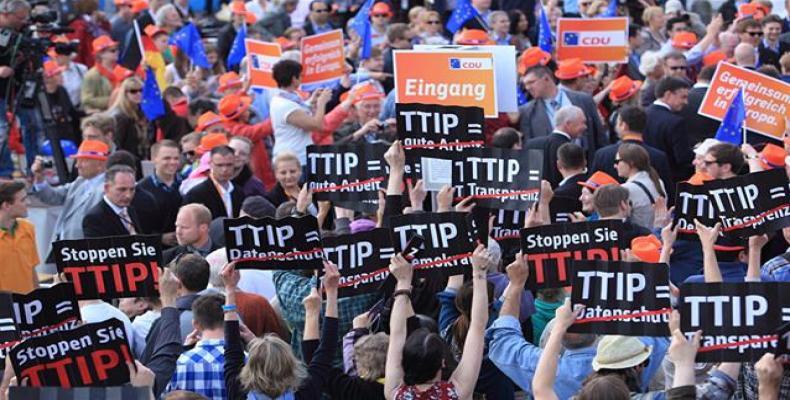 Berlin, October 12 (RHC)-- Nearly a quarter of a million people marched in the German capital, Berlin, against a planned trans-Atlantic free trade pact negotiated by the European Union (EU) and the United States.

According to the Confederation of German Trade Unions (DGB), the organizer of the demonstration, 250,000 people rallied in Berlin over the weekend in protest against the free trade deal between Washington and Brussels as well as a similar deal between the EU and Canada, claiming that the accords are anti-democratic and will lower food safety, labor and environmental standards.

The protesters held up posters reading “Yes, we can STOP TTIP,” while banging on drums and blowing whistles. “This is the biggest protest that this country has seen for many, many years,” Christoph Bautz, the director of Campact citizens movement, told protesters in a speech.

The so-called Transatlantic Trade and Investment Partnership (TTIP) aims to liberalize deals and ease the flow of goods and services between the United States and the EU as well as to create the world’s largest trade zone accounting for more than 60 percent of global production.