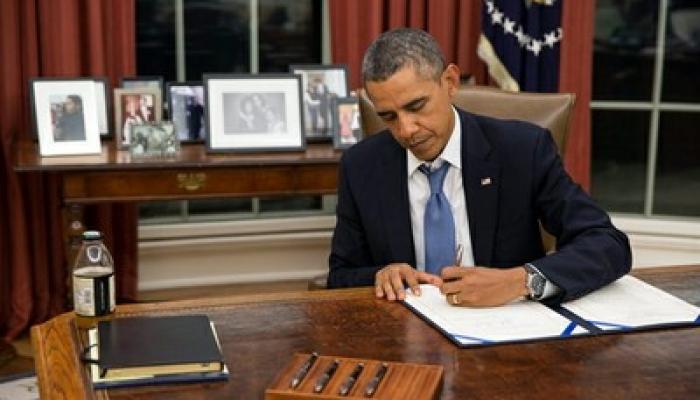 Washington, November 26 (RHC)-- U.S. President Barack Obama has signed the defense bill for the fiscal year 2016, making the closure of the infamous prison at Guantanamo Bay even more difficult. The White House said in a short statement on Wednesday that the president had signed the National Defense Authorization Act (NDAA).

The move makes it more difficult for the president to keep his promise in 2008, while campaigning to enter the White House.

The $615 billion defense bill bans transfer of prisoners from the U.S. naval base in Cuba to the United States. Obama said in a separate statement that he is "deeply disappointed that the Congress has again failed to take productive action toward closing the detention facility at Guantanamo."

"As I have said before, the continued operation of this facility weakens our national security by draining resources, damaging our relationships with key allies and partners, and emboldening violent extremists. It is imperative that we take responsible steps to reduce the population at this facility to the greatest extent possible and close the facility," it read.

The Guantanamo Bay prison, which was set up after the September 11, 2001 attacks, currently holds 112 detainees. Washington says the prisoners are terror suspects, but has not pressed charges against most of them in any court. Many detainees have been on hunger strike for months to draw attention to their conditions at the U.S. military prison.