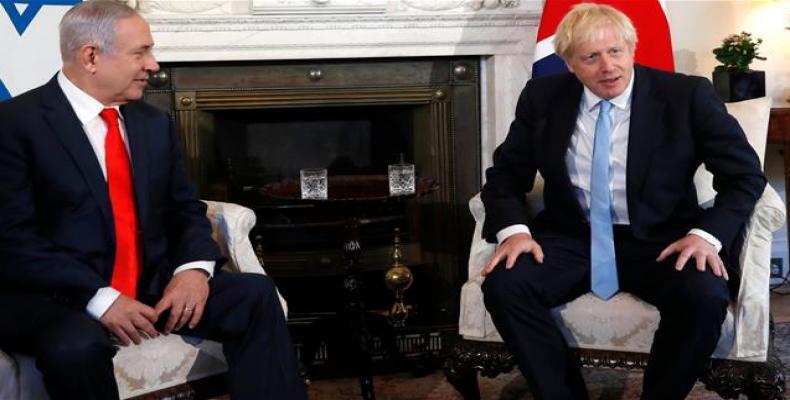 The new Prime Minister of the United Kingdom, Boris Johnson, is reportedly preparing to pass a bill which will outlaw advocacy for the Boycott Divestment and Sanctions Movement (BDS) against Israel, making it illegal for public agencies to engage with any group which participates in boycotts of the Israeli regime.

The story, which first surfaced in INews, has now caught wind in the Israeli press and is seen as another win for Israel to have come from Britain’s recent election, with Labor’s pro-Palestinian Jeremy Corbyn losing to his Conservative Party rival.

Following a hard fought campaign, smearing Corbyn’s Labor Party for alleged anti-Semitism, the right wing Boris Johnson is now being perceived to be paying his Zionist allies a treat.  Labor Party anti-Semitism is present in roughly 0.01% of the Party’s membership, with Corbyn never uttering an anti-Semitic statement.  Boris Johnson’s 2004 novel ‘72 Virgins’ however, contained within it genuine anti-Semitic stereo types, such as the notion that Jews run the media and “fiddle” in elections.

Now it seems that the anti-Semitic, Islamaphobic, Boris Johnson will introduce a bill, which will work to completely silence Palestinian human rights activists in the UK. The bill is of course not only robbing British citizens of their basic human right to freedom of speech, allegedly something that the UK stands for, but it is also introducing racist legislation against Palestinians.

The UK, if the bill is adopted, as INews states as being one of Johnson’s top priorities, will not only mean that Britain will have adopted legislation which isolates Palestinians, but will likely mean that Human Rights Groups and Charities will be forced either into silence or will be shut down.

In the name of fighting supposed anti-Semitism, which is really a cover for protecting the racist policies of apartheid Israel, the UK will force Palestinians to either leave or live in a country where they do not even have a peaceful means of organizing a meaningful boycott of a foreign country.

Of course, anyone who is to point out how ridiculous it is for British citizens to be penalized for boycotting a foreign regime and accuses the Israeli lobby of having power of politicians in the UK will be called an anti-Semite.  The inability to peacefully protest in the UK is a real hallmark of fascism and is a frightening warning of what is to come.

Unfortunately it is not only in the UK that advocacy for Palestine and criticism of Israel is being legislated against.  U.S. President Donald Trump just signed an executive order last week, declaring that being Jewish makes you a protected ethnic group and that criticism of Israel can implicate you in a hate crime against the newly declared ethnicity.

At the beginning of December, France’s parliament also passed a bill, which introduced a similar definition of anti-Semitism to that declared by Donald Trump.  Both definitions were drafted by the International Holocaust Remembrance Alliance (IHRA).  Within the contradictory definition, it declares that conflating Jews with the crimes of Israel is anti-Semitic, but then also goes on to declare that criticizing Israeli policies is also anti-Semitic.

In the United States, the executive order is being used to stamp out BDS activism on campus, in a way that the anti-BDS legislation introduced in over 20 states has still not succeeded to do.  The U.S. also passed legislation earlier this year which condemned the BDS as anti-Semitic.

Both the legislation against BDS and the adoption of the IHRA definition of anti-Semitism are bringing about violations of our right to free speech in the West, yet people are so afraid of being called “anti-Semitic” that they are willing to allow their ability to speak against a foreign power to erode.

Is it now finally at the point where people in the West will begin to oppose this Orwellian nightmare they are falling into?  Or will they cower before the power of Zionist lobby groups and completely lose the ability to speak against Israel’s policies or to even attempt to aid the oppressed Palestinian people?

Robert Inlakesh is a journalist, writer and political analyst, who has lived in and reported from the occupied Palestinian West Bank.  He has written for publications such as Mint Press, Mondoweiss, MEMO and various other outlets. He specializes in analysis of the Middle-East, in particular Palestine-Israel.  He also works for Press TV as a European correspondent.