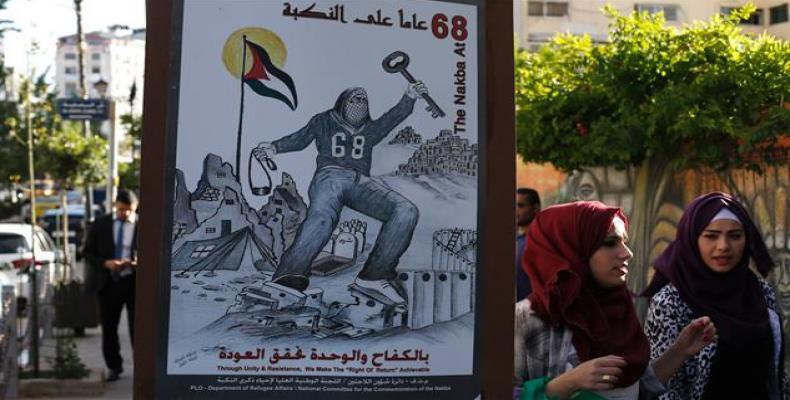 Ramallah, May 13 (RHC)-- Clashes have erupted in the Israeli occupied territories of Palestine as hundreds attend marches in preparation of Nakba Day, commemorated on Sunday, May 15th.

Sporadic clashed were reported on Friday in towns and villages across the West Bank as Palestinians protested for their right of return to the occupied Palestinian territories.

Images showed protesters, waving Palestinian flags and chanting slogans against the Israeli regime, being gassed by Israeli forces in the village of Bilin near Ramallah.  Two Palestinians were injured after Israelis used live ammunition against them in the town of Kufr Qoddum north of West Bank.

The protests come two days ahead of mass march planned by the Palestinians to commemorate the Nakba, or -- 'Catastrophe' -- which is the day Palestinians mark the loss of their homes in the 1948 war that resulted in the creation of Israel and the flight of hundreds of thousands of Palestinians.

Millions of Palestinians and rights activists around the world are expected to observe the official commemoration on Sunday while a huge march will be held across West Bank and also in the besieged Gaza Strip.