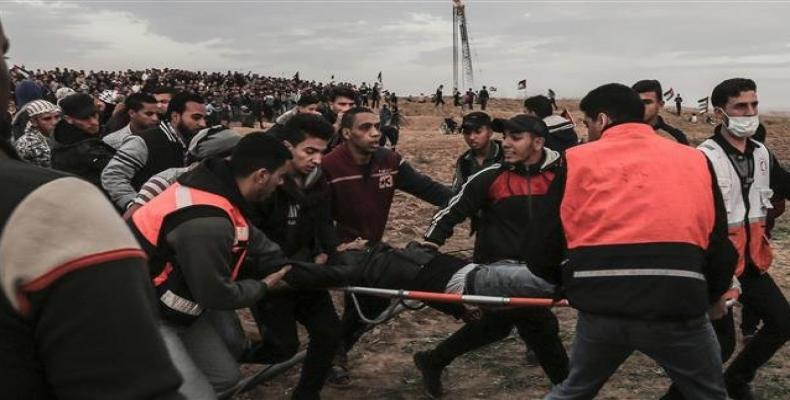 Gaza City, November 17 (RHC)-- At least 40 Palestinians have sustained injuries at an anti-occupation protest along the border between the besieged Gaza Strip and Israeli-occupied territories, as a fresh round of protest rallies drew several thousand Palestinian demonstrators to the flashpoint frontier.

Gaza Health Ministry confirmed that at least 40 Palestinians were injured, including some eight by Israeli live fire.  Of those injured, three are considered to be in serious condition.  Dozens more suffered from tear gas inhalation.

This week's protest was staged under the slogan "Normalization is treason" and the organizers called on the protesters to continue these demonstrations until the Gaza siege was lifted.

The protests on Friday were intended to continue the “popular” and nonviolent struggle to “break the blockade on Gaza completely,” he added.

On Sunday night, seven Palestinians, including a senior Hamas commander, were killed when Israeli military forces staged an incursion into the southern Gaza Strip.

Later on Tuesday, Hamas and other resistance factions agreed to an Egypt-brokered cease-fire with Israel in Gaza Strip as the recent wave of Israeli aggression against the enclave was threatening to descend into full-blown war.

The Palestinian resistance groups announced the ceasefire in a joint statement, saying they would abide by the ceasefire as long as Israel did the same.

The Gaza Strip has been under a crippling Israeli siege since 2007, which has prevented some two million Palestinians from having free access to the remainder of Palestine and the outside world. The blockade has also undermined living conditions in the coastal enclave and fragmented its economic and social fabric.

The Tel Aviv regime carries out regular attacks on Gaza inhabitants under the pretext of hitting positions belonging to the Hamas resistance movement, which governs the territory.

The coastal sliver has also witnessed a fresh wave of deadly tensions since March 30, which marked the start of a series of protests demanding the right to return for the Palestinians driven out of their homeland.

More than 230 Palestinians have so far been killed and over 23,000 others wounded in the renewed Gaza clashes.